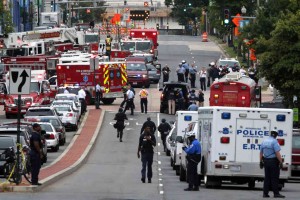 There is never a dispute about the “what” and “who” of mass shootings. For instance, take the recent attack on September 16.

What: Thirteen killed and over a dozen injured in a rampage at the Washington D.C. naval yard.

Who: A 34-year-old African American male, Aaron Alexis with security access to the building.

But mention the word “why” and the politicians, the pundits, the lobbyists, and even the parents, put up their deflectors and unleash the spin machines, immediately playing Bart Simpson who famously said: “I didn’t do it, nobody saw me do it, there’s no way you can prove anything.”

The psychiatrists typically respond to the question of “why” like this: these lone wolves are usually angry men who blame others for their mess. They often seek revenge — without holding themselves responsible.

You see the resemblance now? I bet subconsciously the minds of politicians, pundits and lobbyists whispers: “You too are angry, you too blame others while deflecting responsibility. You too seek revenge.”

And that attitude contributes to the seemingly relentless cycle of violence.

Let’s take them one by one.

Politicians: Almost 90 percent of annoyed Senate Democrats were up in arms as they voted in favor of the idea of universal background checks — which would have made it harder for a disturbed individual to buy a gun — after the Newtown shootings to which 90 percent of the Senate Republicans simply responded: cut it out. What followed was anger, deflection, and a sense of revenge.

Pundits: Angry anchors — tagging @PiersMorgan here — blame the availability of semi-automatic guns and angry lobbyists — tagging @NRA — blame the lack of armed personnel. Conceding a point becomes a matter of life and death. Showing flexibility is dubbed as a weakness.

Parents: They go ballistic over the growing violence in video games while the gaming industry displays their ire at the lack of parental supervision. The message is consistent: You move all the way to accommodate me or I may get angry. I may seek revenge.

Muslims: Thank God we lucked out (or so it seems) but social media is livid with expressions of, “Why do they never blame religion when the gunman is not a Muslim?” Others fume, “Why is there not even a recognition of the problem of extremism within so many pockets of the Muslim world?”

We expect maturity and responsibility from the assailant. But imagine if all of us also shared that burden of responsibility, just a teeny-weeny bit.

But it’s not possible, we are told. People on the top laugh at our expectations. Justice? That’s naiveté. Compromise? That’s a sign of weakness. Responsibility? That’s for grade school.

I disagree. Because getting angry, blaming others and seeking revenge will put us — the American people — right along these politicians, lobbyists, and the gunmen, which is unacceptable to me.

On April 17, 2013, the president shared the road map with the American people from the Rose Garden: “The point is those who care deeply about preventing more and more gun violence will have to be as passionate, and as organized, and as vocal as those who blocked these common-sense steps to help keep our kids safe. Ultimately, you outnumber those who argued the other way.”

I, however, believe deep down that it’s a qualitative argument — not a quantitative one. Let’s not get carried away by the simplistic notion that more laws will eliminate gun violence. They won’t. They can’t.

The next episode of violence can only be shortened or prevented if the people perpetrating the crime are qualitatively different from those entrusted with the authority to prevent it. When all stake holders come to the negotiating table with a cool head and an intention to accept responsibility in their own sphere.

So far, I see all sides angry, deflecting responsibility, and playing Bart Simpson. But there is a problem: the country knows you did it, we all saw you do it and we can prove everything.