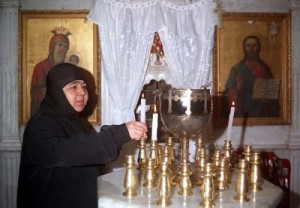 We should all join Pope Francis in his prayers for the nuns in Syria who were kidnapped by rebel troops. It is claimed that these nuns were taken for safety, but this is very unlikely, as minorities such as Christians throughout the two-and-a-half-year war have been caught in this huge mess, and many of their towns and places of worship have been destroyed.

However, this is completely contrary to Islam. The Quran not only prohibits Muslims from attacking houses of worship of all religions, but also commands Muslims to defend them: “… if Allah did not repel some men by means of others, there would surely have been pulled down cloisters, churches, synagogues, and mosques, wherein the name is oft commemorated” (22:41).

As a Muslim-American, I, too, join the pope in praying for these nuns.

How to thwart a war on Christmas

From an Akron hospital to Syria, in the realm of the White Helmets

To Save Syrian Refugees, We Must Kill Apathy

Giving thanks for an extraordinary mother