Originally published in The Daily Star 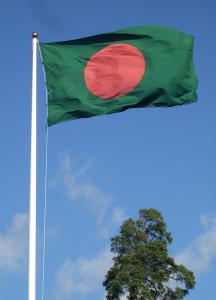 I was born in Pakistan, a few months before the war which resulted in the creation of Bangladesh on December 16, 1971. And it was only after I moved to the US that I recognised the magnitude of human rights abuses the Pakistani army committed against their Bengali “brothers and sisters in faith.” So now, whenever I come across a Bengali in the West, I offer her/him a sincere apology.
The last time it happened was in Canada.
It was past midnight and we were having a blast at my sister’s — who had recently moved to Canada from Pakistan — when my niece’s friend bailed out on colour printing a class assignment. We found a 24-hour open Fed-Ex store a few miles away. I rode in a car full of cousins and within 30-minutes we were collecting colour prints from a Bengali looking spirited young man at the Fed-Ex store. (I know — Pakistanis, Indians, Bengalis and Sri Lankans are a jumbled up mass of nearly 2 billion people to an average American eye but we immigrants have our tricks.) So I politely asked: “Are you from Bangladesh?” “Yes,” he replied. “I am from Pakistan and I am very sorry for what my country did to your people in 1971,” I said it without a warning. Immediately, his face turned red and his eyes welled up. “You don’t have to be sorry sir, you didn’t do anything wrong.” “But it was done by my country, my people, in my name. Granted, I was in diapers back then but that’s precisely why I am apologising to you now,” I insisted.
Before you label me a self-hating Pakistani, let’s agree on what I never read in my Pakistan Studies textbooks.
The roots of this apology lie many time zones away from a Canadian Fed-Ex store, when in 1947 East and West Pakistan gained independence as a united nation. However, despite having a larger population, East Pakistanis were significantly under-represented in civil, military and political arenas. Funds spent on East Pakistan consistently remained under 50% as a percentage of West Pakistan’s spending and the representation of Bengali officers in the Pakistani army was a mere 5% until 1965. I never read this in any Pakistani textbook.
With this backdrop, the Awami League, led by Sheikh Mujibur Rahman, won an absolute majority in the joint elections held on December 7, 1970. But all of its seats were in East Pakistan — geographically separated by over a 1,000 miles from West Pakistan where Pakistan People’s Party led by Z.A. Bhutto won a majority. While a constitutional consensus was being developed, West Pakistan started a military crackdown against East Pakistani dissenters on March 25, 1971. As a result, the idea of an independent Bangladesh was released; Mujibur Rahman was arrested.
If my textbooks had taught me the real history and if the conflict had ended there, I would have avoided this apology. But that’s not what happened. Like in every mass conflict, the exact numbers are debatable. But what is not debatable is that millions of Bengalis were displaced from their homes, hundreds of thousands of Bengali civilians were murdered, thousands of Bengali women were raped, and hundreds of Bengali intellectuals were sent to mass graves. What is not debatable is that whenever I have had a candid conversation with a Bengali in the West, they have told me about a close relative who was killed or raped in 1971. What is not debatable is how my friend at the Fed-Ex store sobbed, telling me about the murder of his uncle and the rape of his aunt at the hands of Pakistani army and their religious proxies.
That is why I repeat: I am sorry my brothers and sisters. My politicians and generals played with you.
This apology comes easy to me because I get it. Being Ahmadis, we know what state sponsored marginalisation feels like. In Pakistan, we too had our families butchered; our intelligentsia slaughtered. Our losses might have been on a smaller magnitude; comparisons of two people’s misery are always risky and debatable but what is not debatable is that for Ahmadis the only choice is to migrate to foreign lands and live a transplanted life — like my sister’s family, who grudgingly escaped Pakistan due to unbearable hate and persecution. But others won’t go down without a fight.
And that’s why I beseech Pakistanis in general, and the state in specific, to offer an apology to Bengalis. If my countrymen allow their emotion to cool off, they will recognise that I am making a pro-Pakistan argument. Believe me: Pakistanis are the beneficiaries. Whether it’s the political plight of Baluchis and Sindhis or the religious fight of Shias and Christians, a new threat of Pakistan’s dismemberment looms large. An apology is required for course correction or I fear the lopsided justice of Pakistan’s ruling class — which dismembered the nation four decades ago — might dismantle it this time.