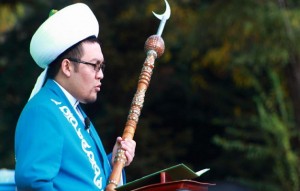 Last week, the Grand Mufti of Kyrgyzstan was forced to resign amidst allegations of adultery with a woman he says is his second wife. He claimed he had the proper Islamic marriage ceremony with her, but since Article 153 of Kyrgyzstan’s criminal code forbids polygamy, this woman could not have legally been a second wife. Thus came allegations of adultery and calls for his resignation.

It is disappointing to see another religious leader embroiled in a sex scandal. People may remember popular evangelical Christian icon Jim Bakker, whose sexual misconduct with a church secretary was revealed in 1987, followed by convictions of fraud and conspiracy that led to imprisonment. World-famous Christian leader Jimmy Swaggart criticized Bakker for his infidelity but later hypocritically availed the services of a prostitute on multiple occasions and even publicly apologized for having sinned. Ted Haggart — president of the National Association of Evangelicals — was forced to resign in 2006 after it was discovered that he paid a male masseur for sex and crystal methamphetamine for three years. The Catholic sexual abuse scandal exposed priests and even archbishops internationally who had sexually abused their congregants. The 2004 John Jay report found that in the U.S. alone 4,392 priests and deacons were accused of sexually abusing 10,667 victims (all under the age of 18) between 1950 and 2002. Also, two rabbis who allegedly sexually abused more than 20 young students of Yeshiva University High School are among a list of Jewish leaders accused of sexual misconduct — including Rabbi Alan J. Shneur Horowitz, Rabbi Sheldon Zimmerman, Rabbi Yehudah Friedlander and many others.

There is no wonder that people continue to lose faith in religion due to the actions of leaders across the religious spectrum. But does the misconduct of these disgraced individuals reflect poorly upon the religion they serve? It is wholly inaccurate and intellectually immature to argue that the religious teachings of prophets Moses, Jesus or Muhammad are to blame for the actions of these deviants. Unfortunately, this is the exact argument made by professional anti-Islam blogger Robert Spencer in response to the Grand Mufti’s scandal.

Moreover, Muslims must understand that the corruption and violent teachings of many clerics is a fulfillment of the Prophet Muhammad’s prophecy. He claimed to receive revelation from God that a time would come when Muslim clerics would be steeped in vices and would be the worst creation on Earth. He did, however, give hope that such a time would indicate that the voice of the long-awaited Messiah and Divinely sent Reformer would emerge, who would come to guide and unite the world.

Perhaps this is why the worldwide Ahmadiyya Muslim Community is at the fore of condemning the hypocrisy, vices, intolerance and violence of many Muslim leaders. They are the only Muslim community to believe that this long-awaited Messiah has come in the person of Mirza Ghulam Ahmad of Qadian, India. He emerged in the late 1800s claiming to have received revelation from God of being the Messiah everyone is waiting for and the Imam Mahdi that Muslims await who would reform mankind. In 125 years, the Ahmadiyya Muslim Community has become the largest organized international Muslim community in the world, united by a Khalifa — the Khalifa of Islam, His Holiness Mirza Masroor Ahmad.

So you have two disparate narratives of Islam. One comes from hate mongers who claim Islam is a violent and intolerant religion hell-bent on world domination. They cite examples of immoral and violent Muslims to somehow “prove” their allegations. The other narrative of a peaceful, moral and tolerant Islam comes from actual adherents and students of the faith engaged in living and spreading peace and tolerance internationally and leading by example in selfless service to humanity. They live good, moral lives due to the teachings of their faith.

I call on my fellow Muslims to stand with me in condemning the un-Islamic behavior of many so-called leaders in the Muslim world. And I call on my fellow Americans to learn about Islam from practicing and devout Muslims who boldly condemn acts of inhumanity and immorality while preaching and enacting peace, morality and tolerance in their day-to-day life due to the teachings of their faith. Let’s discuss the life and teachings of the Prophet Muhammad, his rightly guided Khalifas and even the Quranic verses that are deceptively twisted to justify violence. Let’s combat immorality and intolerance through maturity, integrity and dialogue.