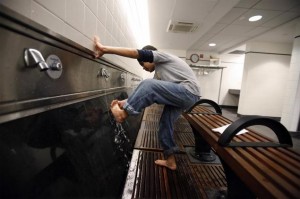 Jamaica Hills: I am an 11-year-old American Ahmadi Muslim. My parents are from Bangladesh, and I am in sixth grade. It has been quite an experience growing up in post-9/11 America with my background. In the fifth grade, every time the topics Islam, Muslims, 9/11 or the World Trade Center were brought up, everyone, including the teacher, would stare at me as if I had something to do with this act of terrorism. In America, people associate the collapse of the World Trade Center with Islam. They show their aggression toward us without knowing the truth about us or our religion. Though it is true that the people who attacked the World Trade Center were Muslims, they were only Muslims by name. Many people are not aware that the meaning of the word Islam is “peace.” As a practicing Muslim who prays five times a day and regularly recites the Holy Koran, it makes me sad to see people spread violence in the name of Islam and send the wrong message to others.

Muslims: To Stop ISIS and Other Terror Group from Disparaging Islam, We Must Clearly Explain the True Concept of Jihad