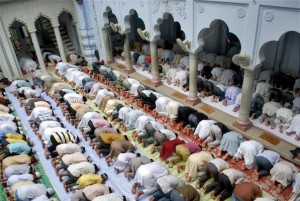 For example, I was surprised to learn that Muslims not eating pork has resulted in “catastrophic deforestation” — even though United Nations studies have shown that South America and southern parts of Africa (both largely Christian) have the highest levels of deforestation, while the Middle East and North Africa (both largely Muslim) has shown little change. Also, Prophet Muhammad specifically forbade cutting trees unless absolutely necessary, even in times of great need. Jews also don’t eat pork, either, but I don’t see Pipes blaming Judaism for deforestation.

Next, I was surprised to learn that high government standards are distressing and the cause of widespread harm. Pipes alleges that Islam’s “unattainably high standards for governmental behaviors” led to “systematically deploying slaves as soldiers.” While some Muslim regimes had slaves, Islam also combated slavery and promoted human equality — a fact explored by scholars like historian Lerone Bennett, Jr.:

As a religious ethic, Islam was unusually effective in cutting across racial lines. All Moslems, whatever their color, were brothers in faith. “If a Negro slave is appointed to rule you,” Mohammed said, “hear and obey him, though his head be like a dried grape.” In this climate, a man could be a slave today and a prime minister tomorrow. An extraordinarily large number of Negroes played heroic roles in the rise and spread of Islam . . . [and] there were . . . numerous black generals, administrators, and poets . . . . [R]ace was not a crucial factor in the Islamic world.

According to Pipes, Islam is also to blame for the Taliban’s anti-polio campaign. But Muslims worldwide have condemned the Taliban’s bogus claim that polio renders children infertile. Let’s also recall that some in the West are anti-vaccine due to the similarly bogus claim that vaccines cause autism. Yet in these cases, we (rightly) blame those individuals, not Christianity or Judaism.

Another surprise from Pipes: the annual pilgrimage to Mecca, hajj, has been the cause of both extremism and disease. Neither allegation holds water. A 2008 Harvard study found that hajj “increases belief in equality and harmony among ethnic groups and Islamic sects and leads to more favorable attitudes toward women, including greater acceptance of female education and employment. Increased unity within the Islamic world is not accompanied by antipathy toward non-Muslims. Instead, hajjis show increased belief in peace, and in equality and harmony among adherents of different religions.” As for disease: observant Muslims wash their hands, feet, face, and noses at least 15 times a day. Meanwhile, Christian and Jewish Europe suffered 25 million deaths due to the Bubonic plague, caused in part by not bathing. Pipes employs a nasty double standard here: apparently any disease related to hajj is blamed on Islam, but 25 million deaths in Europe is just a random act of nature.

I was also surprised to see Pipes inveigh against Ramadan fasting because of supposed health problems associated with the practice. Overwhelming medical science has confirmed the outstanding benefits of fasting as Islam prescribes — it combats cancer, heart disease, obesity, and can delay Parkinson’s disease and dementia. Pipes complains that “60% of respondents reported excessive weight gain after Ramadan” while conveniently forgetting that America has a higher obesity rate than all but three of the world’s 55 Muslim majority nations. Are Christianity and Judaism to blame for obesity here?

It’s likewise surprising to see Pipes mock Islam’s approval of first-cousin marriages. First, the Bible encourages first cousin marriages (Numbers 36:1-11; Genesis 24:48-51; I Chronicles 23:22). Likewise, according to the Catholic Encyclopedia, Joseph and Mary mother of Jesus were first cousins. And the “negative [medical] consequences” warned of are no different than a woman bearing children in her late 30s or early 40s.

Pipes baselessly claims that Islam gives women “lower social and legal status,” ignoring the fact that Islam was the first, and indeed only, Abrahamic faith to give women equal right to marry, divorce, own property, and have an equal say in political affairs. Likewise, Muslims have consistently and vehemently condemned female genital mutilation as well as honor killings.

Then there is Pipes’ concern about the historic and current practice of polygamy. But Islam did not establish polygamy, but rather limited it and enforced the condition that a husband must treat each wife with absolute justice — or not marry. Islam obliges a man to marry only if he is able to treat his wife with absolute justice, full financial support, and full emotional support. Once this is accomplished, Islam permits a man to consider polygamy, but only under strict conditions.

Pipes correctly notes that orphans enjoy an honored status in Islamic law, but baselessly claims that status is tied to tribal structure. The Qur’an universally condemns anyone who oppresses orphans and universally commends anyone who helps orphans. Indeed, Prophet Muhammad was an orphan, and Muslims who abuse orphans do so contrary to Islamic law.