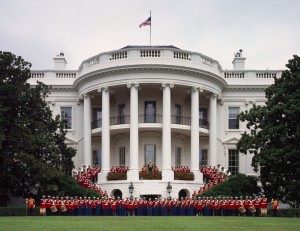 So why and how did “only” 20,000 Americans make history and establish our nation’s first bi-partisan Muslim caucus? In a world of viral change.org petitions and big money election spenders, the Ahmadiyya Muslim Community, USA has shown something inspiring and powerful — that what critics thought was the “little guy” is in fact big in every way. When dedicated to the good of humanity, there’s no such thing as “only” 20,000 Americans. Critics may scoff, but every American should be thrilled that the Ahmadiyya Muslim Caucus now exists. Representatives Frank Wolf (Virginia Republican) and Jackie Speier (California Democrat) received approval from the House Administration Committee to establish the caucus. These two Representatives united to condemn persecution of Ahmadi Muslims and now co-chair the caucus.

Ahmadi Muslims differ from the rest of the United States’ nearly three million Muslims in their belief in the Messiah, Mirza Ghulam Ahmad of Qadian. They consider Ahmad the awaited Messiah that Prophet Muhammad foretold would come to re-establish truth, justice, and revive Islam. (Non-Ahmadi Muslims believe that the only prophet that will come after Prophet Muhammad is Jesus Christ, and await his physical descent from heaven.) For accepting Ahmad as the awaited Messiah, Ahmadi Muslims face persecution worldwide, including in Pakistan, Malaysia, and Saudi Arabia.

Despite this, Ahmadi Muslims categorically condemn all religious violence, practice a peaceful jihad of the pen, engage in dialogues, and perform tens of thousands of hours of community service annually to support all people, no matter their faith.

And it is on this premise of supporting all humanity that the Ahmadiyya Muslim Caucus was born.

To establish the Ahmadiyya Muslim Caucus, American Ahmadi Muslims went beyond merely condemning the 9/11 tragedy, and instead remembered the victims by holding blood drives in their honor. Over the past three years, Ahmadi Muslims and fellow Americans have joined together to save over 100,000 lives through Muslims for Life blood drives.

Ahmadi Muslims don’t pay lip service to interfaith tolerance — we go beyond and host hundreds of interfaith dialogues to promote understanding within our 73 chapters nationwide.

American Ahmadi Muslims have made it their rallying cry to stand up for the impoverished, downtrodden, persecuted, and under-represented.

And all the while, they have done so on their own dime and their own time.

President Obama learned about the Ahmadiyya Muslim Community through years of these dedicated efforts. At the National Prayer Breakfast in February, he mentioned the persecution Ahmadi Muslims face. Members of Congress sent a letter to Secretary John Kerry urging him to press Pakistan to repeal discriminatory voting laws that disenfranchised Ahmadi Muslims. Now we see members of congress — Republicans and Democrats alike — joining the bi-partisan Ahmadiyya Muslim Caucus to combat religious persecution worldwide. Representative Pete King immediately joined and tweeted his support for this caucus.

“Only” 20,000 Americans made American history with the nation’s first bi-partisan Muslim caucus. We invite all Americans of all faiths and all Americans of no faith to join our fight for universal religious freedom for all people.

If 20,000 made American history, there’s no doubt 20 million can make world history.