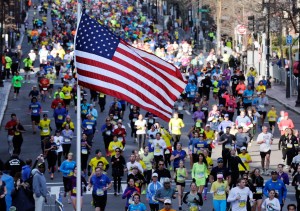 It’s been a year since the Boston Marathon tragedy, which the perpetrators claimed was for the protection of Islam from the U.S. If this religion needs protection from anyone, it’s from the deranged minds and unholy tactics of men like these who distort the teachings of a religion that values peace above all else. The Koran clearly states, “Whosoever killed a person … it shall be as if he killed all mankind.”

Those who truly follow this religion commit acts of kindness and condemn acts of violence. Example: the Ahmadiyya Muslim Community, which is holding a blood drive at Boston City Hall in order to remember those affected by the tragedy. In fact, the overwhelming majority of Muslims would surely join me in extending condolences to the families of the victims and wishing this year’s participants and spectators a safe marathon.

Yameen Khalil is currently a supervising physician in primary care working for the Department of Veteran Affairs (VA) in Oklahoma, U.S. Prior to working in the VA he has done research in medical genetics and anesthesia. He currently serves as Vice Chair for the Muslim Writers Guild of America, in charge of author recruitment and editing for opinion editorials.

Pope may help ties with Muslims