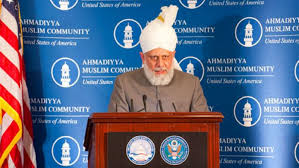 The Muslim world is falling apart.

In Nigeria, a radical group claims Allah commands them to kidnap hundreds of girls and sell them into slavery. Egypt sentences over 500 people to death through speedy trials. A horrific civil war has killed over 140,000 in Syria, and displaced millions more. Iraq and Afghanistan sit in shambles — and let’s not even get into what’s wrong with Saudi Arabia.

Islamic society is fragmented and lost in the wilderness. Band-aid solutions in the guise of unification groups, coalitions and manuals have not helped. The problem is that Muslims have no leader to follow, and leadership matters. Leadership provides a rope for all to hold onto. And with no leader to unify Muslims, the future looks bleak.

But what would an Islamic leader even look like? Regardless of sect, all Muslims would agree that a true Muslim leader must reflect Prophet Muhammad’s power, compassion, and example. So how would Muhammad lead? Well, Prophet Muhammad advocated for all to pursue education. He said, “Seeking knowledge is obligatory for every Muslim” and once you had that knowledge, “impart it to the people.” In the case of Nigeria, he would stand with the teachers, not the kidnappers, and he would instruct them: “It is neither lawful for you to inherit women against their will; nor should you detain them” (Quran 4:20).

Prophet Muhammad practiced absolute justice just as the Quran commands. Muhammad told his family that if they committed any crimes, they would receive no special favors from him on account of their relationship to him. In Egypt, he would rebuke the judges for quickly dispensing verdicts instead of dispensing justice.

Prophet Muhammad was a peacemaker and attempted all means of diplomatic conflict resolution. During his dozen years in Mecca, he faced intense persecution but never reacted violently. He tried to win the hearts, no matter how stone-hearted the Meccans were. When a price was put on his head, he still did not resort to violence but instead left his homeland for a safer haven. In Syria, he would condemn President Assad for killing innocent people, and tell him, “Whosoever killed an innocent person . . . it shall be as if he killed all of mankind” (Quran 5:33).

Such examples describe a model Muslim leader. The Muslim world would no doubt benefit if a man existed today in Muhammad’s reflection.

But what if such a man exists? His Holiness, Mirza Masroor Ahmad, Khalifa of Islam and head of the worldwide Ahmadiyya Muslim Community is the leader the Muslim world needs — just not the one it wants right now. His Holiness leads the world’s largest community of Muslims — spanning 160 million members in 204 nations.

How does Ahmad reflect Islam’s most perfect leader, Prophet Muhammad? Like Prophet Muhammad, His Holiness champions education. Under His Holiness’ leadership, the Ahmadiyya Muslim Community constructed thousands of schools in underprivileged areas around the world. Boys and girls of different faiths attend these schools to learn and to better their society.

His Holiness also advocates a separation of religion and state — a fact he’s stated numerous times. In fact, His Holiness advises Muslims that loyalty to one’s country is a part of Islam. This is rooted in the Quran, which states that Muslims are to respect those in authority (Quran 4:60).

Like Prophet Muhammad, His Holiness is a peacemaker. His Holiness travels the world to unite opposing sides for the common cause of peace and justice. In 2012, he spoke at Capitol Hill to a bipartisan audience and stated that just relations between nations would lead to peace. In 2013, he spoke before the European parliament to champion international equity and economic justice. His key message was no affluent nation should exploit other nations for their resources because these injustices lead to wars.

His Holiness established a platform where Muslims of various sects and nationalities are empowered to unite towards a common cause of peace, prosperity, and progress. His Holiness also speaks at interfaith conferences to promote inter-religious harmony and encourages Ahmadi Muslims to do the same.

And just as Prophet Muhammad today is recognized by scholars, faith leaders, and historians as a truthful champion for humanity, His Holiness has received such recognition from heads of state, faith leaders, and scholars in hundreds of nations worldwide.

Back then, Prophet Muhammad was the leader the world needed. Once the world recognized and observed his example of compassion and justice,  they found peace and progress. A similar predicament exists for Muslims today.