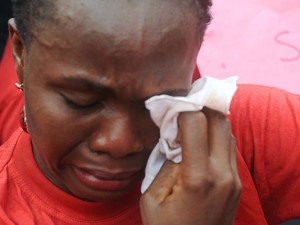 The world has been gripped by the deplorable story evolving in Nigeria about the mass abduction of more than 200 schoolgirls between the ages of 16 and 18. Their “crime” was simply that they were girls and had the audacity to seek an education.

Meet Boko Haram, the name most commonly used to refer to a sadistic terrorist organization in Nigeria who has shown no reluctance to commit malicious acts of violence and terror against Nigerians for the past several years. Their mission is to instill terror into people through kidnappings, bombings, murders, suicide attacks and prison breaks. Their clear message: you are either with us or against us. They desire to overthrow the government and install a brutal form of government that they brand Shariah — but which has absolutely no relation to the concept of Islamic law found in Islam’s scripture or in the example of its prophet, Muhammad.

Last year, Boko Haram’s leader Abubakar Shekau cited reasons for its series of kidnappings: “We are holding them for no other reason than that Cameroonian and Nigerian authorities arrested our brethren, they are holding them, they are humiliating them, including women and children.” Their kidnapping of children — namely girls — is a retaliation but also a means to bar young girls from going to school as they consider “Western education” to be inauthentic and thus unlawful according to their ideology.

But to call them abductions does not convey the severity of the situation. The girls were not just abducted; they were enslaved. Monday’s video featured Shekau boasting that these girls are his slaves, and he will sell them. Clearly, the state of emergency Nigeria declared one year ago has failed to bring Boko Haram’s terrorism to an end.

The U.S. government recently offered material support for locating the girls. Of course, the world wants to see these girls rescued, but even if successful, it will only represent a victory of a battle, and not the war. If Boko Haram is unwilling — and the Nigerian government is unable — to end the ongoing streak of injustices, terror and chaos, then more international pressure will be needed.

How can I as a father sit idly by, while other fathers and mothers in Nigeria continue to face the ultimate torture of having their child taken from them and enslaved? How can I as an Ahmadi Muslim man sit idly by while other Muslim men claim Islam as their motivation for committing the most reprehensible acts?

Members of Boko Haram have demonstrated their total disregard for the lives, property, safety and health of the people of their country. It is up to those in government and law enforcement to end their reign of terror and reinstate justice and security in the country. In turn, thought and theological leaders must use education, opportunity and conversation to fight the savage ideology that fuels groups like Boko Haram. Until that happens, we will find ourselves in a perpetual war of guns, chaos and unhappiness. Surely we are a moral people. We can do more to alleviate the pain.

“It is up to those in government and law enforcement to end their reign of terror and reinstate justice and security in the country. In turn, thought and theological leaders must use education, opportunity and conversation to fight the savage ideology that fuels groups like Boko Haram”
Nothing new in your method of “how to”, but worth reminding those advocating for one dimensional military solutions. Nigeria is practically a failed state and any solution must necessarily be multi-pronged. Whilst errant Islamic interpretation may explain why Boko Haram believe what they do, it is corruption, poor governance, the lack of education, and poverty which better explain why they are able to do what they do. The presence of American, French and Israelis on the ground to assist in the search for the kidnapped girls is laudable, but where is the international focus and support for education and institution building measures to target corruption? And where is the international support for helping Nigeria transition from a loose collective of ethnicities to a unified national identity? Nigeria needs exploratory surgery not band aids.
Nigeria is ranked 144 out of 175 in Transparency International’s 2013 corruption index, and 129 out of 178 in the Heritage foundation’s 2014 index of economic freedom.