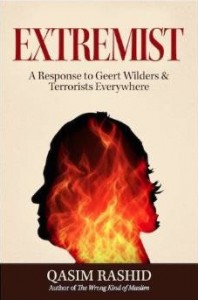 No Muslim has promoted the notion of a “jihad of the pen” more poignantly than Qasim Rashid, Ahmadi spokesmen, Muslim activist and author of the new book EXTREMIST: A Response to Geert Wilders & Terrorists Everywhere. A fervent advocate of human rights and a penetrating writer on Islam, Rashid has been actively promoting religious pluralism, freedom of conscience, and a world vision which regards bridge building and knowledge as the best way to improve relations between Muslims and non-Muslims. His activism, articles, and books over the last several years has made him one of my role models.

EXTREMIST is a methodical, point-by-point counter argument to the outrageously negative remarks made byGeert Wilders, the anti-Muslim Dutch politician. Rashid exposes Wilders as an ignorant bigot who lacks scholarship and formal training in knowledge of Islam. Rather than spreading misinformation and distrust like Wilders, Rashid’s EXTREMIST promotes knowledge and looks for ways to build bridges between Muslims and non-Muslims by promoting pluralism, tolerance, and service to humanity. In this interview, Qasim answers my questions concerning his background and EXTREMIST.

Qasim, you are a leader who has dedicated his life to knowledge and bridge building. What has inspired you to do this? Who are some of your role models?

For me it began at home with my father. Growing up at first I never quite understood why he dedicated his life—even as a young man—to the service of Islam and humanity. It didn’t seem the most financially sound or glamorous job. But as I began to see how he interacted with those of different faiths, how he spoke of lessons learned from the Qur’an and Prophet Muhammad, from the teachings of Jesus Christ and Prophet Abraham, and from the writings of Mirza Ghulam Ahmad—I began to understand the power and importance of bridge building. My role models are my father, and most certainly God’s prophets. Likewise, His Holiness the Khalifa of Islam, Mirza Masroor Ahmad, continues to be a shining light in these dark times. Without his guidance and prayers I know for certain none of my writings would be possible.

In recent years other Muslim sects and religious groups have persecuted the Ahmadi community more than ever before. What is it like being a spokesman for the Ahmadiyya Muslim community?

It is simultaneously a burden and a privilege. It is a burden because for obvious reasons. It is a privilege because it is an opportunity to serve.

I wrote EXTREMIST to continue a worldview I discuss in The Wrong Kind of Muslim—to advance a narrative of tolerance, education, and compassion. All too often extremists on both sides get their voices heard while the moderate majority are elbowed out of the way. This is my push to make the moderate narrative not only the relevant narrative, but also the most powerful one.

Over the years you’ve been applauded as well as criticized by people from all walks of life because of your commentary on Islam. What has been the initial reaction to EXTREMIST?

So far the response has been overwhelming and beautiful. Upon launch EXTREMIST rose to Amazon’s #1 Best Selling book on Islam. It is still Amazon’s #1 New Release on Islam. I hope the momentum does not stop. The feedback has come from people of all faiths and of no faith. My goal withEXTREMIST was not to evangelize Islam but to present an intellectual narrative against extremism—a narrative too few have heard. I am convinced that if people saw the Islam Prophet Muhammad actually taught and practiced, they could not help but recognize Islam as a just, compassionate, and pluralistic religion. That was and is my goal with EXTREMIST and so far so good.

Early in the book you touch upon the life of the Prophet Muhammad, peace be upon him, and you mention how he ascribed to values such as compassion, justice, and service to humanity. What does Muhammad mean to you and how does his example relate to EXTREMIST?

Prophet Muhammad means everything to me. One of my favorite quotes of the Messiah Ahmad is, “After God, I am intoxicated with the love of Muhammad. If this is infidelity then by God I am the greatest infidel.”

Prophet Muhammad’s example relates to EXTREMISTbecause his life is in fact that middle narrative that extremists like Wilders and the Taliban miss. Both present a polarized version of Islam that is alien to what Prophet Muhammad actually taught and practiced. If nothing else, I hope my readers walk away from my book with a newfound sense of respect for Prophet Muhammad because of what he did for the benefit of humanity in all spheres of life—racial equality, gender equity, and interfaith harmony.

One of the bigger themes I picked up in your book was the notion of the ‘jihad of the pen’. Can you explain what you mean by this phrase?

Mirza Ghulam Ahmad, the Messiah and founder of the Ahmadiyya Muslim Community, wrote that with his advent the Jihad of the sword was no more, and now comes time for the Jihad of the pen. That is, an intellectual bloodless Jihad against ignorance, false beliefs, injustice, and intolerance. This Jihad strives for universal human rights, universal freedom of conscience, secular governance, and compassion for all humanity. This Jihad is the antithesis of what extremists like Wilders and the Taliban promote, and indeed such extremists are incapable of overcoming this intellectual Jihad of the pen.

In EXTREMIST you continuously highlight Geert Wilders’ hypocrisy because he singles out Islam while neglecting controversial phrases in his own Judeo-Christian tradition. Why do you think Islam is singled out more than Judaism and Christianity?

Well I think that’s the narrative the west has seen. Yes, Islam is singled out but I don’t want to give the impression that only Islam is singled out. Indeed, according to the Taliban, all Christians and Jews are evil and should be discarded of. This is why I make it a point to call EXTREMISTa response to Geert Wilders and Terrorists everywhere. The point is that we need to recognize that every faith and ideology has its extremists. Rather than viewing a faith by its worst people, understand it by its best, most compassionate, and most learned. This is what extremists like Wilders and the Taliban refuse to do, and this is why we need to continue to write our narrative of tolerance to overcome their intolerance.

Say that you had the opportunity to sit down with Geert Wilders for 10 minutes. What would you say to him?

I’d give him the three choices that I wrote in my epilogue to EXTREMIST. Hopefully he would choose option one, or two. But, I have a feeling he’s going to choose option three—and that’s unfortunate.

The best response to bad ideas is better ideas. My challenge to Wilders is that if he genuinely believes his narrative of Islam has a shred of truth to it, he should have no trouble intellectually responding to my arguments—with facts, authentic references, and verifiable events. His book is a hodgepodge of nonsensical arguments mixed with fabricated events and pumped up with unverifiable claims by unqualified Google scholars. If Wilders has a shred of dignity, let him respond with intellect, not extremist claims about his culture’s alleged superiority and Islamic inferiority. In making such grandiose claims, all Wilders does is liken himself to Hitler and his claim of his culture’s superiority and Jewish inferiority. Wilders should rise above this bigotry and respond with intellect—as that is what builds bridges. I hope he has the courage to be compassionate and educated, and respond accordingly. In reality it is not too late for Wilders to admit he was simply wrong—in which case I hope he does so and stops his anti-Muslim tirade.