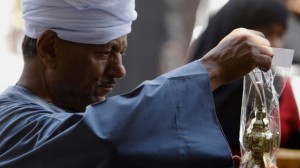 This year, Ramadan starts on June 29. Over 1.5 billion Muslims, despite their sectarian differences, will be united to reinvigorate their faith.

In a country where nearly one in four Americans don’t want to have a Muslim neighbor and some employers are not eager to recruit them, this poses a problem. Because in July 2014, folks may notice a change in the behavior of their Muslim neighbors and coworkers.

So here is a cut and dried version of what to expect and what not to suspect.

I urge you, during this Ramadan, to get to know real Muslims.

If your neighbor’s lights comes on at 3:30 am, rest assured, he is making omelets, not bombs. Ramadan means we eat before the first ray of sunrise and then refrain from eating and drinking till sunset. And no… fasting does not make him a fanatic either; according to a 2013 Pew poll, which surveyed 38,000 Muslims in 39 countries, fasting is observed by 93% of Muslims worldwide.

Then there’s this. If you walk into the office restroom and catch your colleague with his foot in the sink (awkward!) and his shoes lying on the floor don’t run. The guy is performing ablution, a necessary ritual to wash your hands, nose, face, forearms and feet before offering the five daily prayers.

During a water cooler conversation, when your friend’s cell phone chimes a melodious Arabic ringtone, don’t worry. It’s simply a Muslim call to prayers (Athan).  The summary of the words of Athan is: God is the one, the Only and the Great; Muhammad is his messenger; and come to prayers, come to success. By the way, neither Athan nor Kuran mentions the word “infidel.”

If your colleague asks to take 10 days off at the end of July, don’t sweat it. Prophet Muhammad used to spend the last ten days of Ramadan in solitude, praying intensely. The practice is called, Itekaaf. The idea is to turn off your cell phone and cry: God … can you hear me now?

If a belligerent coworker starts withdrawing, don’t assume he or she is turning into a lone wolf. The person might be avoiding provocative situations because Muslims are required to refrain from quarrelsome behavior during fasting.

Here is the one you’re really going to like: Muslims are commanded to be charitable during Ramadan. So ask your Muslim neighbors and colleagues to write a check for a good cause. If they get edgy, remind them to gulp their anger. They will become a pussycat.

Despite having differences in beliefs, the religiosity of American Muslims is comparable to Christians. According to the Pew Research Center for 72% of U.S. Muslims religion is “very important,” as compared to 60% of U.S. Christians who told Pew they feel the same way.

Sadly, in a post-9/11 United States, Muslim religiosity makes some of our journalists, neighbors and employers nervous.

That nervousness, to some degree, is understandable. But I didn’t want the Ramadan rituals to add to the palpitations.

So relax my fellow Americans. People who flew jet liners into tall buildings are an anathema to my faith. Those espousing violence and hatred are Muslims only in name.

I urge you, during this Ramadan, to get to know real Muslims. We will laugh; we will play. We’ll serve you food, any time of the day.