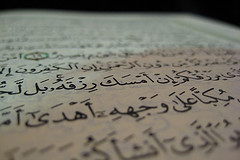 Since the militant group known as ISIS (the Islamic State of Iraq and Syria) declared that the “caliphate has been re-established” in an area straddling the two countries, I’ve been inundated with emails, tweets, and texts asking for my opinion and explanation. I expected this, as in the past few months I’ve written and been interviewed numerous times on His Holiness the Khalifa of Islam, Mirza Masroor Ahmad, whom the world’s Ahmadiyya Muslims take to be the true Khalifa, or Caliph.

Rather than reply to a barrage of emails, I thought I would address the bulk of questions here. These are the six things every Muslim and non-Muslim should know about the Caliphate.

Caliph, or Khalifa in its Arabic form, literally means “a successor,” or “one who succeeds another.” After Prophet Muhammad died, a system of Khilafat was established to keep the Muslim community united and to serve as moral and spiritual leadership. The first four Khalifas, Abu Bakr, Umar, Usman, and Ali are collectively known as “The Rightly Guided Khalifas.” This Khilafat lasted approximately 32 years, after which internal division and corruption led to the first split among Muslims — the Sunni-Shia split. Since then, the Muslim Ummah (community) has never been united under a Khalifa.

2. How is Khilafat established?

This verse explains not only that God will establish a successor among those who do good works, but also explains what that Khalifa will facilitate: “security and peace after their fear.” Thus, any notion that the Khalifa will create violence, terrorism, and bloodshed is a concept alien to the Qur’an.

Prophet Muhammad further foretold that after his death, Khilafat would be established, then soon end, but then one day return to Muslims once more just as it did the first time — on the precepts of prophethood. A brief look at Islamic history demonstrates that Prophet Muhammad foretold precisely what Muslims have endured.

3. If Prophet Muhammad was right, then where is that Khilafat on the precepts of Prophethood?

The Khilafat of the Ahmadiyya Muslim Community was established in accordance with the Qur’an and Prophet Muhammad’s prophecy. Mirza Ghulam Ahmad claimed to be the awaited Messiah and Mahdi to revive Islam, bring man back to one God, and establish unity. Ahmad was that future prophet that Prophet Muhammad foretold would come.

His Holiness Mirza Masroor Ahmad is the fifth Khalifa of Islam since Ahmad’s demise. He continues that promised Khilafat, which has run uninterrupted for 106 years and counting. This Khilafat has vociferously stood for universal freedom of conscience, separation of mosque and state, human rights, education, and free speech. This Khilafat promotes good works and has removed fear and replaced it with security and peace for those people who accept this Khilafat and divine guidance. Today, the Ahmadiyya Muslim Community spans over 160 million Muslims in over 204 countries worldwide, and is the world’s fastest growing Muslim sect, seeking to unite humanity in peace and security.

4. Why do Muslims accept Mirza Masroor Ahmad as the Khalifa of Islam when the majority of Muslims do not accept him?

As Khilafat is a divinely appointed office, legitimacy does not come from humanity, but from God Himself. Muslims who accept Mirza Masroor Ahmad as the Khalifa of Islam do so because they believe Prophet Muhammad was right that Khilafat would be re-established on the precepts of Prophethood. Indeed, this Khilafat was established on the precepts of prophethood after the Messiah Ahmad’s demise in 1908.

Moreover, throughout history, every claimant to having been sent by God was met with severe opposition and violence by the majority. The violent opposition by extremists against the Ahmadiyya Muslim Community is no different.

And far from being a sect minority, the Ahmadiyya Muslim Community is the world’s single largest Muslim organization united under one Imam, His Holiness the Khalifa of Islam.

5. Now that Al-Baghdadi of ISIS claims to be the Khalifa, why is one Khalifa more legitimate than the other?

The decision of legitimacy is based on the standard explained above of the Qur’an and Prophet Muhammad. His Holiness Mirza Masroor Ahmad continues a Khilafat established on the precepts of Prophethood, while the ISIS Khilafat was not. His Holiness promotes peace and security instead of fear and violence, while ISIS repeatedly calls to destroy non-Muslims and Shia Muslims. His Holiness is uniting Muslims of all sects into one Muslim community, while ISIS is only creating more sectarian conflict and terrorism. This simple comparison demonstrates which Khalifa adheres to the Qur’anic example and Muhammad’s example (Ahmad), and which does not (al-Baghdadi).

6. What do Muslims who accept His Holiness Mirza Masroor Ahmad as the Khalifa of Islam advise on what to do with ISIS?

There are two elements to this question — the spiritual and the worldly. On a spiritual level, this is a matter between the new claimant to Khilafat and God. The new claimant is assuming an office that God has reserved for Himself to select. Thus, we believe God will address the new claimant as He deems appropriate.

On a worldly level, there is no doubt that the new claimant has violated any number of national and international laws. He is a violent man, a vicious terrorist, and a criminal of the highest order. We hope and pray that no more people are harmed from his violence and that he is brought to justice for his crime against humanity.

Thus, His Holiness Mirza Masroor Ahmad has advised, “The life of the Prophet Muhammad, the holy founder of Islam who such terrorists claim to represent, is filled only with countless examples of peace, tolerance, respect, and a deep love for humanity.”

Prophet Muhammad’s love and tolerance — that is what true Khilafat stands for.