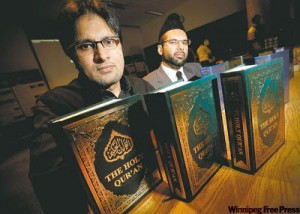 We have all heard of Sudan’s death penalty for the “crime” of leaving Islam. Saudi Arabia, Iran, Pakistan (since 2007), Yemen and Afghanistan have similar rulings for apostasy. Do these punishments have any basis in the Islamic faith? Does Islam really punish freedom of conscience?

I was discussing this on social media when a friend and fellow writer Ali Amjad Rizvi claimed: “…the Koran clearly promotes death for apostasy,” leaning on interpretations from the work of Maulana Abu Ala Maududi — the “father of modern Jihadi terrorism” — and Khomeni. “This is one area where I completely agree with Maududi,” he said.

This was a bold claim, because unlike the Bible, there is no mention of apostasy laws in the Koran. Even Sam Harris, a notable critic of Islam, admits to this fact in no ambiguous words: “Interestingly, [the penalty for apostasy] isn’t spelled out in the Koran.”

Ali insisted, however, that Maududi – and not Sam Harris – was credible in his understanding of the Koran. “Sam Harris has not read the Koran in detail,” he pleaded. I, therefore, called him to prove the apostasy laws from the Koran.

Muslims consider the Koran the word of God. Hence, it is the primary and supreme source of jurisprudence in Islam. The practice of Prophet Muhammad, Sunnah, is second in line. Both leave no doubt that apostasy is not a punishable offense at all, let alone by death. Any counter narration or any counter-interpretation of any scholar or cleric, let alone that of the “father of modern terrorism,” stands void when pitched against the Koran. Presenting such statements as solid evidence superseding the Koran only hurts the academic credibility of the critic, exposes their weak understanding of Islamic jurisprudence and bares their biases.

The Koran repeatedly mentions freedom of conscience as one of its basic tenets. “There is no compulsion in religion (2:256),” and “Let him who will believe and let him who will disbelieve (18:29).” Belief is mentioned as a matter of personal choice. The next part of the latter verse makes it clear that God – not man – is the sole judge of faith (or the lack thereof) and will reward or punish as He wills in the Hereafter.

This rule applied to Prophet Muhammad equally. His job was solely the delivery of the message, not its imposition by force. God says in the Koran: “So if they submit, then indeed they follow the right way; and if they turn back, then upon you is only the delivery of the message…(3:20).” And: “Obey Allah and obey the Messenger and be cautious. But if you turn back then know that the duty of Our Messenger is only a clear deliverance of the message (5:92).” This theme is repeated throughout the Koran. Man is given free choice to accept the message of Islam, refuse it, or turn back on it. God reserves the right to impart judgment for these choices in the afterlife.

Interestingly, both extremists like Maududi and extreme critics of Islam are at odds with the Koran on such issues. Radical Muslim clerics like Maududi indulge in rhetorical gymnastics and go at great lengths to misrepresent clear verses of the Koran to portray their own perverted political viewpoint. Extremist critics proudly regurgitate these same fallacious arguments as credible Islamic position. My colleague, Qasim Rashid, explains this in great detail in his newly released bookThe EXTREMIST.

Mr. Rizvi accepted my challenge. However, he started off my quoting “eminent Islamic scholars,” and a few narrations ascribed to Prophet Muhammad. This was all irrelevant to the motion he was debating. His claim was that the Koran – not the clergy – endorsed Sudan’s apostasy laws.

In the end of his response, he cited three verses. The first verse he quoted (4:89) speaks of hypocrites – not apostates – who were keen on fighting the State of Medina. “They (hypocrites mentioned in preceding verse) long that ye should disbelieve even as they disbelieve, that ye may be upon a level (with them). So choose not friends from them till they forsake their homes in the way of Allah; if they turn back (to enmity) then take them and kill them wherever ye find them, and choose no friend nor helper from among them.”

The reference here is to those Bedouin tribes that had formed mutual alliances with Muslims, but were planning on entering into a confederation with the Meccans against Prophet Muhammad at the same time. Muslims were advised against befriending such hypocrites. In case they resorted to treason through open hostilities, Muslims were commanded to engage them in a fight. The next verse makes this even clearer. In 4:90, God forbade the Muslims from fighting those of the hypocrites that remained peaceful. “…if they hold aloof from you and wage not war against you and offer you peace, Allah alloweth you no way against them.”

Where is apostasy mentioned?

The second set of verses Ali quoted were 9:11-12, which refer to those leading enemies of Islam that broke peace treaties with the Muslims and lodged military offensives against them. “And if they break their pledges after their treaty (hath been made with you) and attack your religion, then fight the heads of disbelief – Lo! They have no binding oaths – in order that they may desist.”

Where is the apostasy mentioned again? Quite to the contrary, these verses admonish Muslims NOT to fight a disbeliever only on account of their disbelief. The newly emerging State of Medina was faced with hostilities from all sides. Like the first verse, this one also relates to such times of war. If the disbelievers broke their covenant of peace by attacking the Muslims, the Koran permitted fighting back the heads of such warring tribes. Self-defense is a right permitted elsewhere in the Koran as well.

The third set of verses Ali quoted was 8:12-13. These verses relate to the battle of Badr, when a thousand-men well-armed Meccan regiment waged war on the Muslims – 313 in number and ill armed in comparison. Haven endured over a decade of persecution with persistent exercise of patience and prayer, the Muslims were averse to fighting. The Koran permitted them fighting in self-defense and urged them to face any offensive with courage and resolve. The purpose of such self-defense was to uphold freedom of conscience by bringing an end to ongoing religious persecution (8:39). As promised in these verses, Muslims found miraculous victory at Badr and the hearts of the warring enemy were indeed “filled with terror.”

Where the Meccan aggressors at Badr, apostates?

Mr. Rizvi also quoted verse 5:33, which, again, clearly speaks of permitting self-defense against those who waged war on the Muslims in Medina and created uncalled-for chaos.

All cited verses pertain to times of war in the early history of Islam. They permit fighting in self-defense against warring enemies and confronting hypocrites guilty of high treason. The one thing they certainly do not speak of is apostasy.

Extremists like Maududi have it all wrong. So do those who blindly regurgitate their extremist viewpoint as credible, at the cost of their own credibility. Such unintellectual reliance on extremism to misrepresent the words of the Koran exposes the inherent prejudice of certain critics. This is exactly why Sam Harris wisely distances himself from making such a baseless charge.

While his claims was that the Koran sanctioned apostasy laws, Mr. Rizvi kept citing other sources to make his point. He cited a paper that explained how the Imams of the four traditional Sunni schools of thought held apostasy by a Muslim male punishable by death. The opinion of any cleric or Imam was irrelevant to this debate. What was relevant, however, was a statement in the very start of this paper: “…No judgment on apostates is mentioned in the Koran…It is not mentioned in any of the Prophetical sayings (either)…”

It is note-worthy that though the Koran does not speak of apostasy laws, it does speak of apostasy more than a dozen times. At none of these places, however, does it prescribe any human punishment for abandoning faith. “Lo! Those who believe, then disbelieve and then (again) believe, then disbelieve, and then increase in disbelief, Allah will never pardon them, nor will He guide them unto a way (4:137).” This verse reiterates that man is free to believe or disbelieve and to do so as many times as he wills. God will be the sole judge of such acts of apostasy.

And again: “He who turns back on his heels shall not harm Allah a whit. Allah will certainly reward the grateful (3.145).” 5:55, 16:107 and countless other verses also emphasize the same message.

Apostasy laws – like the blasphemy laws – have been borrowed from older scriptures. They have no basis in the Koran. This is why clerics who espouse such extremist beliefs show continued reluctance to debate Muslim scholars and intellectuals on this issue. The fourth Khalifa of the Ahmadiyya Muslim community, for instance, Mirza Tahir Ahmad, authored a detailed rebuttal of the Maududian philosophy on apostasy several decades ago.

In short, it is not due to the scholarship of the Koran, but because of the ignorance and insecurity of extremist clerics that countries like Sudan punish apostasy. The Koran upholds Freedom of Conscience in clear terms.