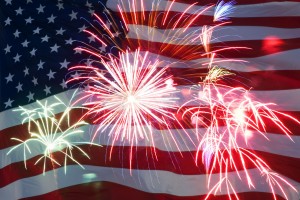 As a Muslim-immigrant to the United States of America, I find special meaning in the Fourth of July, an occasion symbolizing the struggle for freedom.

As testimony to our nation’s commitment to freedom, I often reflect upon how Americans have upheld freedoms for Muslims in the aftermath of 9-11 — despite the negative stereotypes.

Such commitment to freedom commands loyalty to our great nation.

This sense of loyalty is further accentuated for me as I reflect upon and seek to follow the example of the founder of my faith, Prophet Muhammad.

Muhammad endured severe persecution for declaring his monotheistic faith in a polytheist society. When the persecution became unbearable, he took it upon himself to migrate for the sake of maintaining his beliefs and practices.

His migration to the city of Medina was precipitated by an invitation from the leaders there to mediate among the city’s feuding tribes.

As a staunch monotheist and a believer in the biblical prophets, it was thought he would curry favor with the Jewish tribes.

And as an Arab, it was believed, he would succeed with the polytheists too. They were not wrong.

Muhammad immediately set to the task of drafting accords, agreements and reportedly the first constitution to guarantee the freedom of conscience.

He upheld the injunction of the Quran that there can be no compulsion in religion (Chapter 2, verse 256).

In time, he would even take up armed conflict to defend freedom.

This commitment to freedom is one reason cited by historians for the early Islamic Empire’s expansion at exceptional speed, finding favor with newly acquired citizenry.

Later, after Muhammad made his mostly bloodless conquest of his hometown of Mecca, he returned to Medina as an example of his sense of loyalty to the city that had adopted him and permitted him to practice his religion.

However, he also warned that a time will come in the distant future when his followers will misinterpret and misrepresent these great teachings.

Today, the values of freedom and loyalty are very precious to me as an Ahmadi Muslim.

As Ahmadi-Muslims, we believe that Mirza Ghulam Ahmad, who lived in 19th century India, was the messiah that Prophet Muhammad prophesied would come to restore Islam’s true teachings.

Ghulam Ahmad shunned the belief-system of aggression and violence in the religious injunction of Jihad — which literally means “to strive.” And that these contemporary notions cannot be reconciled with the conflicts in Muhammad’s era.

This belief, which runs contrary to notions extremists held, has brought severe persecution upon Ahmadi Muslims in some Muslim countries. Many Ahmadi Muslims have lost their lives to extremists.

Some are able to escape and migrate to the United States in search of freedom. Those who cannot, nevertheless, uphold their beliefs even under mortal threats.

Hardly a day goes by that I don’t feel a sense of appreciation, gratitude and loyalty for the freedoms I have in the United States of America, including the freedom to practice my religion.

Please join me in celebration of this Fourth of July in honor of our nation and the indispensable freedom of conscience it upholds.