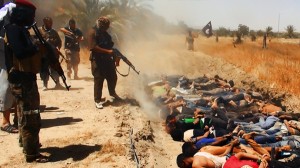 Two terms used in the media today in conjunction with each other are ISIS and “Caliphate.” The former is the acronym for the Islamic State of Iraq and Syria, an extremist militant group waging a territorial war in that region; the latter is a divinely guided spiritual leadership from the perspective of Islam.

These two things cannot possibly have any relationship with each other, and I will give a short background and explanation on both as to why.

ISIS (also known as the Islamic State in Iraq and the Levant, or ISIL) sprung from the remnants of al-Qaida in Iraq. ISIS disassociated itself from al-Qaida in 2011 so it could fight against the Syrian government. ISIS gained power and recognition under the mysterious leadership of Abu Bakr al-Baghdadi. A couple of months ago, it militarily gained a foothold on large swaths of land between Iraq and Syria, erasing the border between the two. It wants to create an Islamic state under a caliphate, which will be ruled by a barbaric religious law, renowned for cruelty and violence against its enemies.

“Caliphate” is an English-modified term from the Qur’anic Arabic word “Khilafat,” or a spiritual “successor” of a prophet of God.

When the Qur’an uses the word “Khalifa,” it presents three things among others that must happen before its (Khilafat) true establishment (Qur’an 24:56).

1) Muslims must completely follow the teachings of Prophet Mohammed and must not go against them.

2) Following the teachings of Prophet Mohammed will change their behavior to do good and positive things that will benefit everything and everyone around them.

3) They also will exemplify Islam’s notions of peace and pluralistic governance so that everyone can live equally without the fear of violence, persecution or discrimination under them.

If we compare these three things to what ISIS has done so far, we find that the group has not exhibited any one of them. It has failed to follow the teachings of Prophet Mohammed at every level by torturing and killing people (POWs and innocent civilians), destroying and stealing property (recently the largest Syrian oil field), causing fitna (disturbance) against sitting governments (Iraq and Syria), persecuting people who hold different beliefs (Shiite, Christians, etc.) and seeking war rather than achieving peace.

This also has prohibited ISIS from completely exhibiting the second or third points.

There are a couple of examples in Islamic history that we can look at in which true Khilafat was established. The first example was after the demise of Prophet Mohammed, also known as Khilafat-e-Rashida (the Righteous Caliphate), made up of Abu Bakr, Umar, Uthman and Ali.

Their individual accomplishments were numerous, but on a short scale Abu Bakr unified Muslims to work together for the greater good; Umar created one of the largest welfare states the world had ever known in a goal to eradicate poverty to the extent that he would go out in the middle of the night by himself to see if anyone was still hungry or needy; Uthman further built this welfare state with his own personal fortune; and Ali’s main objective was always maintaining peace over war.

The second example is a modern-day one — the Ahmadiyya Muslim Community, establishing Khilafat for around 106 years and over five different people. The current and fifth standing Khalifa of Islam within this community is Mirza Masroor Ahmad, residing in London.

He has given countless lectures on world peace and equal rights and justice for all in many different places across the globe, including Capitol Hill in Washington, D.C., and the European Parliament. His community has served humanity in over 200 countries around the world through blood drives, feeding the poor, clean water initiatives, building modern villages in rural Third World nations, disaster relief and charity walks.

His message to ISIS and the entire world was, “Extremist Islamic groups (such as ISIS) and the so-called Caliphate that extremists are trying to establish in the Middle East are a complete betrayal of the true peaceful teachings of Islam and will never succeed.

These groups have attached their own cruel ambitions to an institution (Caliphate) that in reality seeks to champion the rights of all people. Let me make it clear that the institution of Caliphate leading the Ahmadiyya Muslim Community has no interest in power or government. Rest assured that true Khilafat (Caliphate) has no worldly or political objectives.”

This is why ISIS and Caliphate have no relationship with each other — because ISIS is not a true Caliphate but a political system whose tendencies are antithetical to Islam’s notion of peace and governance.