Is anyone surprised that hate crimes have increased 31% in 2016? This year has been exceptionally revealing in terms of hidden, hateful sentiments. But hate based crime isn’t just an American issue. Unlike apple pie, hate based crime is on the rise globally as well.

My religious community, The Ahmadiyya Muslim Community, is especially familiar with violence stemming from intolerance in Pakistan. On Monday, December 12th, a mob of 1,000 attacked an Ahmadi Mosque while worshippers were inside. This incident occurred in the Punjab province of Pakistan, resulting in one confirmed death and many wounded. The horrific event is being shared widely on social media with the hashtag #IStandWithAhmadis. However, unlike in the U.S., the violence we face in Pakistan is completely sanctioned by the government.

The plight of The Ahmadiyya Muslim Community, the world’s largest Muslim community under one spiritual leader, His Holiness the Khalifa of Islam Mirza Masroor Ahmad, has been non-stop since the community’s inception. In the Lahore Massacre of 2010, two Ahmadi mosques were simultaneously attacked during Friday prayers, resulting in 94 deaths. In 2014, five houses belonging to community members were set ablaze, and an eight-month-baby and seven-year-old girls were killed in the fires. In the same year, an Ahmadi doctor from the U.S. visiting Pakistan on a volunteer trip was gunned down after paying respects at a cemetery 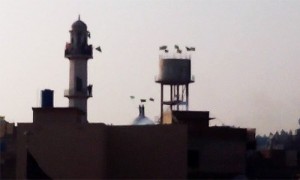 in front of his wife and children. Just last week the administrative offices of the Ahmadiyya Muslim Community in Rabwah, Pakistan were raided in response to the publishing of literature. In all these instances, government condemnation and retribution is measly, if at all present. The latest in this slew of persecution is the 1,000-person mob attack on the mosque in Chakwal District, Pakistan.

How did the community get to a point of such stringent and severe treatment, and how does this relate to us Americans? The government of Pakistan made a flawed step shortly after the creation of the new country. They took hateful rhetoric and sentiments, put them in the political sphere, and legitimized the ideas through a legal amendment. Theological differences always existed between the Ahmadi community and the Sunni majority. But, in 1974 the constitution was amended to declare Ahmadi Muslims as non-Muslims. Then, in 1984 the infamous Ordinance XX was adopted to criminalize any attempts by Ahmadi Muslims to “pose” as Muslim. The legislative duo effectively stripped Ahmadi Muslims of all religious rights. Further, the laws have emboldened the extremist mindset against the community, as attackers know they can act with relative impunity. But this is expected from a theocratic government, right? We have nothing to worry about in our democratic bubble, correct?Wrong. Pakistan was founded as a democratic safe haven for all minorities. The founder, Muhammad Ali Jinnah, an ardent democrat, once said, “Minorities to whichever community they may belong will be safeguarded. Their religion or faith or belief will be secure.”

Jinnah’s vision for Pakistan has sadly been mutilated. The plight of the Ahmadi Muslims in Pakistan shows us, Americans, that we’re not as insulated from legalized hatred as we think we are. Don’t forget that the political party of the President-elect once asked all Republican candidates during the first primary, “If any of them have received word from God on what they should do.” The mixture of religion and politics plays a huge role in the legitimization of hatred, and we’re not impervious to this happening.

So the next time my President-elect Donald Trump calls Pakistani Prime Minister Nawaz Sharif, instead of simply saying he’s “doing amazing work,” I request him to demand the rights of Ahmadi Muslims. The United States should diplomatically approach the Pakistani government to repeal their internationally illegal laws. We should also take a lesson from this case of human suffering and reflect on how far we really are from once again legalizing hatred and intolerance.

I call on my fellow Americans to begin to heal our post-election wounds in an attempt to move away from an intolerant society. I call on my Muslim sisters and brothers to condemn these acts of violence against Ahmadi Muslims and to combat stereotypes in their own communities. Love for All, Hatred for None.

Ibrahim Ijaz is currently a second year pre-law student at the University of Michigan, Ann Arbor. He is interested in pursuing International Human Rights law. Ibrahim is the President of the UM chapter of Humanity First, organizing and leading 20 students to Guatemala for a medical service trip. His interests include photography, reading, and he is also working on a historical non-fiction