Like many other Americans, I am struck with disbelief over the new executive order by President Trump restricting Muslim refugees. I have a personal reason to be outraged. I am a Muslim refugee myself.

I was born in Pakistan and raised by devout Muslim parents. In 1974 and 1984, through a constitutional amendment and presidential ordinance respectively, members of my  Islamic sect – the Ahmadiyya Muslim Community were declared heretics and denied their basic religious freedoms. Thousands of Ahmadi Muslims – including three of my own uncles – were jailed across the country for ‘crimes’ such as reading the Quran or identifying as Muslim. Numerous Ahmadiyya Mosques and businesses have been burned down since, and hundreds of Ahmadi Muslims killed by extremist mobs. Ahmadi Muslim physicians were specifically targeted and at least three were gunned down while I was in medical school in Lahore, Pakistan.

As if my faith alone wasn’t enough, the fact that I have always been a vocal critic of religious fanaticism made me a favorite target of the extremists. To seek peace and security therefore, I had to move out of Pakistan.

Towards the end of 2008, I came to the United States, sought asylum, and adopted America as my new home. It was not an easy transition. It is never easy. But it was necessary.  After so many years, I finally knew what it felt like to enjoy security and religious freedom, and to be able to exercise my right to free speech. I was no longer a prisoner of conscience. And so began my new life as a refugee half way across the world.

I have since took upon myself to champion the cause of universal freedom of conscience — specifically in parts of the ‘Muslim world.’ I have written extensively, condemning religious extremism and promoting peace, tolerance and interfaith coexistence.

I have also made sure that I remain an active member of the community wherever I live. When an extremist from my home country tried to bomb Times Square in 2010, I was completing my medical residency in New Jersey. The Ahmadiyya Muslim Community USA immediately responded to the act of terror – and the ensuing fear and suspicion of Muslims – by launching a national ‘Muslims for Peace‘ campaign. As the local president of the Ahmadiyya Muslim Youth Association North Jersey, I rallied young Muslims and hit the streets across Northern New Jersey, distributing hundreds of thousands of fliers condemning terrorism and getting the message across that Muslims – like other Americans – stand for peace.

Then in 2011, at the 10th anniversary of 9/11, we launched the ‘Muslims for Life‘ campaign. The aim of this initiative was to commemorate 9/11 victims and to honor their memories by shedding blood – our own. As an organizer, I set up tens of blood drives with keen participation from members of the Muslim – and non-Muslim – communities. Every year since then, the campaign has helped gather enough blood to save over 30,000 American lives. The same year, I was honored to be one of several activists to receive the Presidential Service award conferred by President Obama for community service.

In 2013, I moved to Boston to pursue a fellowship in Cardiology. Here, the Muslim community doubled its blood donation efforts. The ‘Muslims for Life’ campaign was expanded to also include special blood drives to remember the victims of the Boston Marathon bombings. 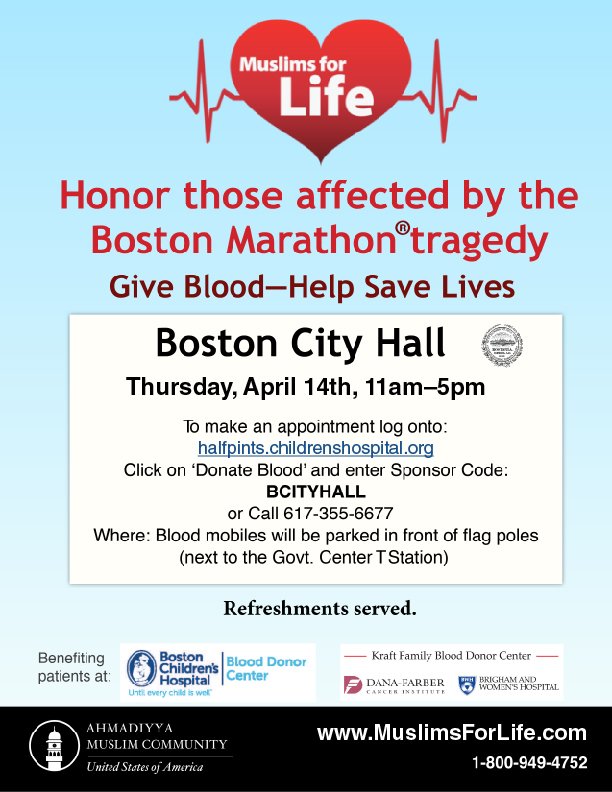 How Boston Muslims are commemorating #BostonMarathon attacks; By shedding blood – our own! Join us! #MuslimsForLife 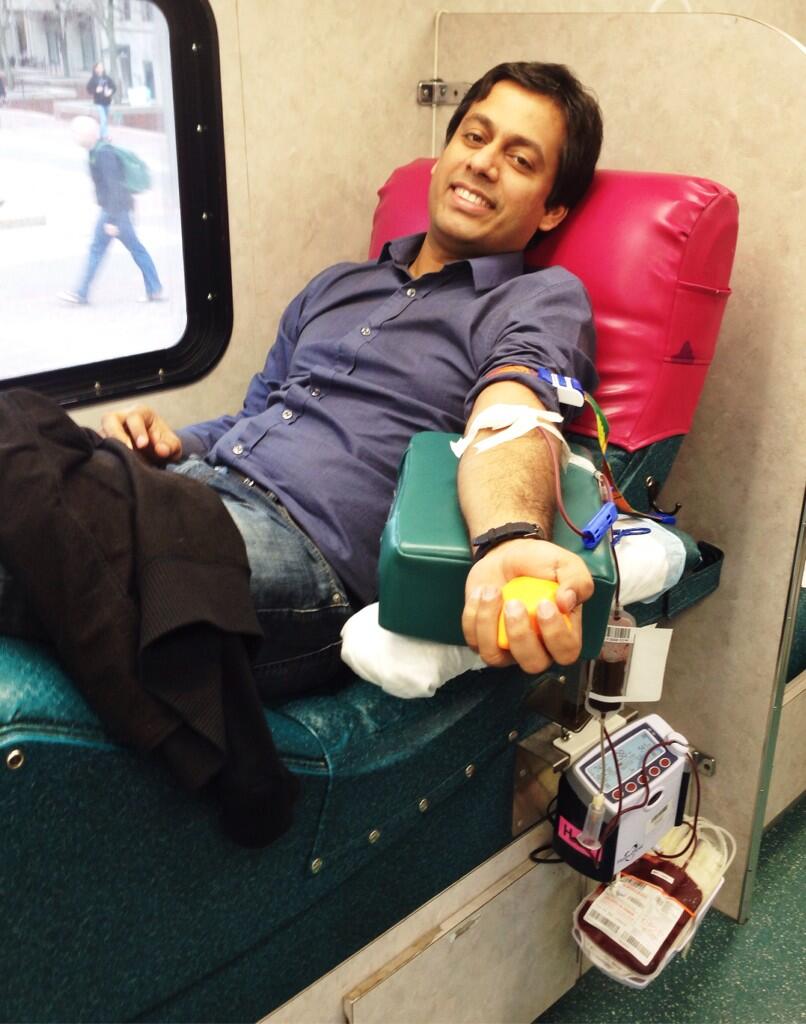 Boston we bleed together! #BostonStrong #MuslimsforLife

Despite my love for my American family, I witnessed some of my fellow countrymen grow increasingly suspicious of me over the years. To counter this disturbing rise in Islamophobia, I decided to reach out to fellow Americans and try to alleviate their fear through education. In mid 2016, I started serving as the Boston area director for the True Islam campaign. Every Friday, we hold open forums where people come to have coffee, make friends with local Muslims and have an informal dialogue on Islam. Over 10,000 Americans have already responded to the call by visiting a Mosque or by signing up as a #MuslimAlly at TrueIslam.com. This is not a mere gesture of solidarity, it is empowerment with education, compassion, and a clear message that we are the United States, and we will remain so against all attempts to divide us.

It is now 2017. I am now a cardiologist. And I am pursuing advanced training in the exciting field of Cardiac Electrophysiology, spending my days implanting pacemakers and defibrillators, and performing cardiac ablations with some of the country’s finest Electrophysiologists. In the seven and half years of my clinical training and practice in the United States, I have had the opportunity to care for thousands of fellow Americans.

And I am not alone. There are tens of thousands of Muslims like me, grateful for America’s refuge, and busy serving its people – their people. It gives me great alarm to think that just a little off by time and place, and I could have been banned entry into the United States today. For the fight I have put up against extremism, the chances that I would be alive today would have been very slim. It pains to think that the Muslim refugees in the Middle East who are fleeing violence and persecution like I once did,  won’t find the same open doors that America provided me.

I understand the genuine threat of ISIS and religious extremists very well. But to make those barbarians an excuse to ban the most vulnerable victims of their terror is atrocious. And if you do not understand the difference between us and our tormentors, come have coffee with us.