Published in the Philadelphia Daily News, on March 20th 2017

When you’re an American Muslim, it’s bad enough that you have to take all kinds of crap from people because of your faith.

But imagine deliberately putting yourself in a position, where you are trying to explain Islam and fielding silly questions from fellow citizens, such as “Are you straight from the Middle East?” and “What religion do you practice?”

Frankly, I’m not sure I would have the patience to do it.

But that’s exactly what members of the Ahmadiyya Muslim Community subjected themselves to on a recent Saturday. Despite frigid temperatures, they positioned themselves at several locations around Philadelphia, including Ninth and Wharton Streets in South Philly. They stood in small groups, holding up signs saying, “#MeetaMuslim” or “Ask me anything.” They were motivated, in part, by a new poll by the Pew Research Center that reveals what most folks already know: that most Americans know little or nothing about Islam.

The Ahmadiyya Muslim Youth Association, a group for Muslim men and boys, organized the demonstrations to clear up misconceptions about Islam. Similar gatherings took place at more than 125 locations in about 80 cities nationwide.

“Our signs essentially said, ‘I am a Muslim. Ask me anything,’ ” explained Dr. Madeel Abdullah, an anesthesiologist who spent a couple of hours outside on the sidewalk near Geno’s Steaks and Pat’s King of Steaks talking to strangers. “So, whatever questions people have, we want to help and answer the questions.” 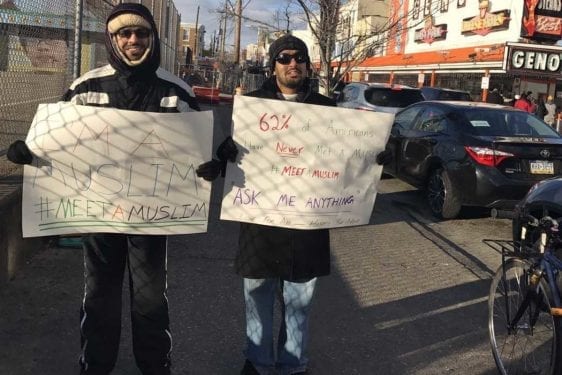 In 2010, Time magazine reported on a survey that revealed that 62 percent of Americans claimed never to have met an American Muslim. In Philly, that’s hard to imagine, given the city’s sizable Muslim population.

At any rate, the Ahmadiyya Muslim Youth Association is out to change that. Local members plan to head back out to Center City again on March 25. This time, they’ll be stationed near  Independence Hall, holding their “#MeetaMuslim” signs and hoping to soften a few hearts.

“It’s our job to spread what we really are,” said Dr. Iftekhar Ahmad, 40, an assistant national director of outreach for the Ahmadiyya Muslim Youth Association. “I can’t make somebody listen, but once the truth’s out there, then that’s a start.”

I wish them luck. It won’t be easy, given the amount of fear and loathing surrounding Islam these days. President Trump’s  incendiary campaign promise to impose a Muslim travel ban and subsequent executive orders attempting to limit immigration from certain countries with large Muslim populations hasn’t helped.

Last month’s Pew study pointed out that Americans who lean Republican had a more negative view of Muslims now than in 2002, just after the 9/11 attacks. The opposite was true for Democrats, according to the report.

“It’s up to us, meaning the Muslims, to clarify these misconceptions,” said Ahmad, who’s also a physician. “It’s easy to say, ‘Oh, that’s not true.’ OK, but what is true? What are the issues? What does Islam say about, for instance, women’s rights? That’s one that’s always pushed. If you really look at it, Islam champions women’s rights. It champions women’s education. … People say, ‘Well, what about jihad?’ Islam categorically rejects all forms of terrorism. It’s not OK.”

At the recent #MeetaMuslim meetup in South Philly, one passerby called out the Arabic greeting of “assalamu alaikum” which means “peace be with you.” Another told the men, “You need to be on every street corner of Philadelphia and educate everybody.”

But then, there was the young woman asking, “What religion do you practice?” Mind you, she posed that to a guy holding the sign saying, “I’m a Muslim. Ask me anything.” Taseer Bhatti, a West Chester University student who was born in Maryland, was surprised but didn’t let it show. Nor did he get irked. As he explained later, “That’s why we were out there in the first place.”