I was in London four days before the attack in front of Parliament on the 22nd in which 3 people were killed and 40 others injured. I was visiting both for a medical school interview, and—more importantly for me—a personal meeting with my Beloved Spiritual Leader, His Holiness the Khalifa of Islam, Hazrat Mirza Masroor Ahmad. He is a well-recognized champion of world peace, and is uncannily—given the timing of yesterday’s tragic event—scheduled to headline the Ahmadiyya Muslim Community’s 14th National Peace Symposium which has been every year in England since he became the Khalifa. Read more about His Holiness here: KhalifaofIslam.com. I was myself in front of Parliament with my mother, who was my traveling companion, on the 17th, after having been blessed to perform my Friday prayers behind His Holiness earlier that same day.

First of all let me say, that—and I feel that unfortunately I must continue to repeat this ad naseum—that I condemn this attack in totality, and there is no justification for it. My complete and utter sympathies go out to the victims. I quote the official press release of the Ahmadiyya Muslim Community when I say that I “strongly [condemn] the barbaric attacks in Westminster [yesterday]. [My] sympathies and prayers are with the people of London and all those affected. Such attacks and violence against innocent people can never be justified under any circumstances.” I quote the Holy Qur’an when I say that, “Whosoever kills an innocent…it is as if he has killed all of mankind” (5:33)” The Ahmadiyya Muslim Community has its headquarters based in London, and indeed London is the residence of our Khalifa. The AMC built the first mosque in London’s history, Masjid Fazl also known as the Fazl Mosque or the London Mosque, which was completed in 1926. By the way this mosque was funded entirely from the funding of women of the AMC from Qadian, India, the community’s birthplace. The AMC is established in over 209 countries, including the USA, and we are known by all as champions of world peace. In fact we believe that physical Holy War does not apply to today’s day and age, the time of the Promised Messiah (peace be upon him). In fact our motto is “Love for All Hatred for None”. I do not yet know if the perpetrator of yesterday’s attack was a “Muslim”, but I do know that an anti-Muslim agenda will only be strengthened by yesterday’s horrible event.

Having given due love and respect to the victims, I want to tell a different tale of Islam, a different Muslim tale that took place last week. I want to very briefly tell my story. Traveling from BWI to LHR I wore a shirt that said #MeetAMuslim on the front and Love for All Hatred for None on the back. #MeetaMuslim is an initiative of the youth auxiliary of the AMC, noting that around 60% of Americans have never met a Muslim (at least knowingly). On the flight to London an elderly woman spoke to my mother and told her that she was very excited to speak to her, because she saw that I, her son, was wearing this shirt. She turned out to be a reverend, Rev Carrol Cook, in her church, the First Christian Church in Baltimore in Roland Park (where I went attended Gilman School for 13 years) and she was already in contact with our community. In this way my mother was able to convey to her the message of True Islam (TrueIslam.com). On the way back to America I wore the same shirt. An elderly man working at security at LHR at the scanning belt smiled at me and told me that he liked my shirt. At the gate, an elderly Episcopalian woman from Virginia also said she liked my shirt. Kudos to the elderly! Later on the flight I ended up sitting next to a middle-aged Catholic priest, Father Juan Antonio Granados of Madrid, and a very lively and friendly conversation ensued in Spanish (which I speak). A lot of myths were clarified, notably about the status of women in Islam (equal), and the concept of Holy War (inapplicable to today’s day and age). I also explained that my mother’s head scarf was something that she chose to wear voluntarily, and that nobody had the right in Islam to force her to. Amazingly Mr. Granados really liked the idea of the veil, and indicated that he was quite in favor of the idea of religious symbols. He gave me well wishes to go forward and progress in my religion. My mother sat next to a lady from China who was a student, and also spoke to her extensively about True Islam. In this contacts were made, and the message of True Islam was disseminated. If you can imagine the flight to London from BWI was 7 hours, and the flight back was 8.5! 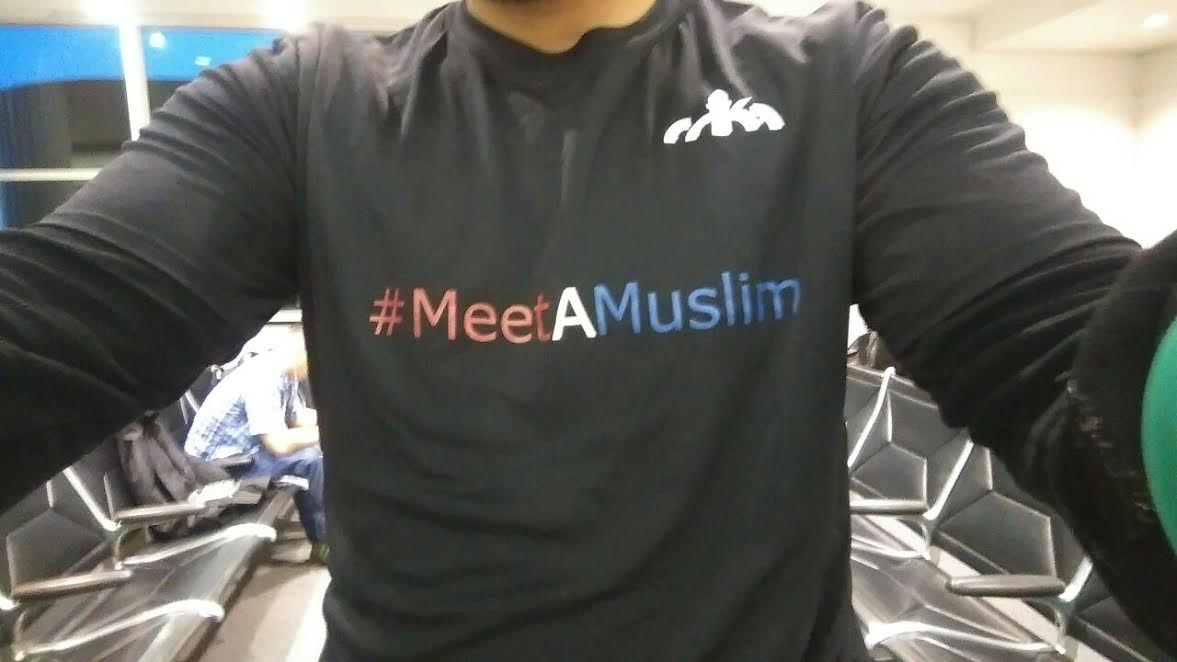 Upon returning to immigration at IAD, my father and I got black X’s on our immigration papers, and we thought perhaps that we would be questioned. My father also got an X before when he was returning from a recent flight from Dubai where he was on business for a Hospital project based in Ghana he is undertaking in service to the poor in West Africa. On that trip he was stopped and interrogated. However we were able to avoid the long customs line and go straight to see a security officer who let us go very quickly. Maybe it was my #MeetaMuslim shirt?

I want all Luthervillians, all Baltimoreans, all Marylanders, all Americans, and indeed all citizens of the world to know that I am a Muslim. Ask me anything. Google the AMC’s #MeetaMuslim campaign. Google KhalifaofIslam.com. Google TrueIslam.com. Find out the truth about Islam. Salaam. Peace be upon you.