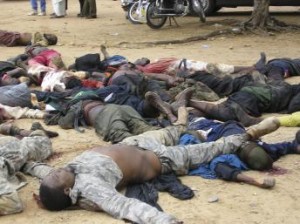 Boko Haram, a Nigerian militant group that claims to be Muslim claimed responsibility for several church bombings around the time of Christmas. This is the same extremist group that killed dozens of innocent Christians on the New Years bombings last year.

Such inhumane acts cannot be justified in the name of Islam. The Holy Quran states that, “there is no compulsion in religion.” These extremists cannot possibly be true followers of the Prophet Muhammad, who condemned such acts of belligerence towards other religions. In fact, Holy Quran (22:41) commands Muslims to protect houses of worship, explicitly citing churches.

As a member of the Ahmadiyya Muslim Community, I must condemn all acts of terrorism towards any religion, especially those which are conducted in the name of Islam.

Badar Malik is currently serving as the Vice Chairman of Muslim Writers Guild of America. A freshman in college, Badar will go on to study Athletic Training at the Ohio State University along with Pre-Medicine. He plans on attending Medical school to receive his MD. Badar has published in several leading Ohio newspapers. Find him on Twitter or reach him at [email protected]

Pakistan’s Second Amendment is Root Cause of Sectarianism