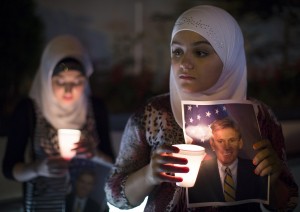 As with many of you, my Twitter feed spiked Wednesday with tweets about an anti-Islam film and ensuing murder of U.S. Ambassador to Libya J. Christopher Stevens. Moments later and likewise, posts demanding an unequivocal condemnation from American Muslims flooded my Facebook.

Though it astounds me that some hold Muslim Americans accountable on behalf of extremists 5,000 miles away, here goes. I can speak specifically on behalf of the Ahmadiyya Muslim Community to condemn this senseless violence in the strongest terms. Likewise, I have seen only similar explicit condemnation from my colleagues in countless different Muslim communities worldwide. But this condemnation is not new. We condemned the post-Danish cartoon violence that resulted in dozens of deaths and countless more injuries in 2005. We condemned the post-Terry Jones Koran-burning violence that killed 31 in Afghanistan in 2010. And now we again condemn this senseless violence in 2012.

Take the Park 51 Mosque for example. Legitimate reasons of sensitivity and timing certainly existed in its construction—but anti-Islam elements instead chose to fabricate fears of alleged Islamic supremacy to express their opposition. It worked. Two dozen states have tried or passed some sort of “anti-shariah” legislation. The Justice Department reports that of the 28 anti-Mosque campaigns that have emerged since Sept. 11, 2001, 18 have emerged since the Park 51 showdown.

And the trend forward is not exactly promising.

According to the Southern Poverty Law Center, anti-Muslim hate groups have nearly tripled since Sept. 11, 2001 to over 30. In a throwback to 1940s Japanese American civil rights violations, the New York Police Department admitted it illegally spied on Muslim Americans in New York for six years—without a single arrest. How ironic that in claiming to prevent Muslim Americans from violating the Constitution, the NYPD themselves trampled several fundamental constitutional principles, like due process and privacy? Likewise, federal enforcement agencies have promoted vitriolic anti-Islam training modules, teaching that “the more devout a Muslim, the bigger a threat s/he is to America.”

Even “looking” Muslim warrants a backlash. Since Sept. 11, Sikh Americans have suffered over 700 hate crimes; a fact the Justice Department admits is a consequence of rising Islamophobia. After the act of terrorism on the Oak Creek Sikh temple in August, media spent more time explaining the difference between Islam and Sikhism than reporting on the incident or condemning the act.

In the days, weeks, and years after the Sept. 11 attacks, then-President George W. Bush repeatedly praised Islam as a peaceful faith, clarifying that the 19 who committed the horrific act did not represent the 1.5 billion who condemned it. Yet, something tells me amnesia is not the culprit when, 11 years later, numerous politicians perpetuate the fabrication that Muslim Americans threaten American sovereignty. No amount of flyer distributions would convince such individuals otherwise.

The fact is that such prejudice does not protect America, but awards victory to the cowards who concocted and executed the attacks. Americans did not defeat Nazism and Japan because we stripped Japanese and German Americans of their constitutionally protected rights. No intelligent person recognizes Japanese internment camps as a source of pride or protection for American citizens. Likewise, government, media, and individual hate mongers who today obscure constitutional freedoms to Americans who choose Islam as their faith, do not protect America. Rather, they do exactly what the Sept. 11 terrorists hoped—tear our country apart.

The young mother of two was right. No citizen should have to “prove” their Americanness any more than any other citizen. So let’s get back into the black. On the 11-year anniversary of the Sept. 11 attacks, it is time to give victory to tolerance and pluralism over prejudice.

Our future depends on it.

Qasim Rashid is a leader in the Ahmadiyya Muslim Community USA. Follow him on Twitter @MuslimIQ or email at [email protected]