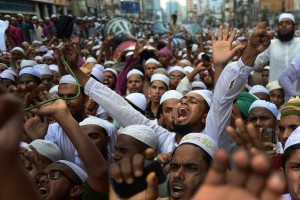 I have a favorite line from a poem, Robert Frost’s “The Road Not Taken”: “Two roads diverged in a wood, and I, I took the one less traveled by, And that has made all the difference.”

Our nation needs to work together to fight intolerance regardless of how difficult it is because it will make the difference to attain a better tomorrow.

Everyone must play his or her part. Muslim-Americans, for instance, can begin by collectively condemning the brutal murder Sept. 11 of U.S. Ambassador Chris Stevens and his colleagues in Libya and the overall global reaction of some Muslims to the anti-Islam movie “Innocence of Muslims.”

As a Muslim-American, I am not going to go around throwing rocks, burning down buildings and hurting innocent people to protect the honor of Prophet Mohammed. There is no justification for this kind of intolerance in my faith or humanity. Instead, I am going to reflect on what he would have done in a situation like this.

Prophet Mohammed and his followers suffered through austere conditions for 13 years in Mecca. People threw trash on his head when he walked the streets. Camel entrails were put on to his back while he prostrated during prayers. He was verbally abused on a daily basis. His family members and followers were abused and killed, and their bodies were desecrated.

To all the persecution, his response was forbearance, emigration and forgiveness. During the first tense years, he ordered some of his followers to migrate to Abyssinia, which was ruled by King Negus, a just Christian King. After 13 years of persecution, he himself left for Medina. When he finally returned as victor after 10 years in exile, he forgave all the people in Mecca, including his bloodthirsty foes.

The “Innocence of Muslims” is a baseless and despicable attempt to denigrate the character of an honorable person and to hurt the sentiments of billions of people who hold him in great reverence. It created an unnecessary furor among the public, and a few decadent groups used the situation to their own benefit to spread violence and terror.

Many in America have condemned the movie as a symbol of intolerance and a vehicle to spread hate. Nakoula Basseley Nakoula, the filmmaker linked to the movie, was quoted as saying, “Islam is a cancer. The movie is a political movie. It’s not a religious movie.” His words are a sad reminder that ignorance is what leads to intolerance.

The conservative politicians, think tanks and pundits should be wary of this and come out collectively to denounce this kind of intolerance, but sadly they are hesitant to do so. In some cases, they have become the catalyst to promoting the very hatred the film espouses.

Take Newt Gingrich, for instance, who said in 2010, “America is experiencing an Islamist cultural-political offensive designed to undermine and destroy our civilization.” Or the recent comments of Sen. Jon Kyl (R-Ariz.), who blasted the State Department for condemning the movie: “It’s like the judge telling the woman who got raped, ‘You asked for it because of the way you dressed.’ OK? That’s the same thing.”

Kyl was referring to the United States being the victim, but simply condemning the movie does not mean you are blaming the U.S. It only means we respect the sensitivities of all our countrymen.

As Frost’s poem illustrates, the best choice can be the toughest one. It is easy to go down the road that will divide this country, but to travel the road of tolerating each other’s differences is much more difficult. We need to work together to ensure that the latter choice is made.

Ahmed Khan of Oshkosh is a member of the Muslim Writers Guild of America.