Originally Published in The Everett Herald 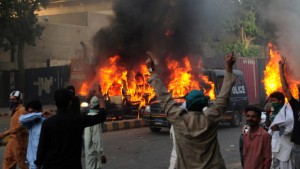 Muslims – the riots must drain out.

In case you haven’t noticed the vicious cycle, let me illustrate. On one hand, you have the anti-Islam propagandist who time and again in the guise of freedom of speech create and promote baseless shameless materials. On the other, you have fanatics who react to such propaganda and wreak havoc resulting in loss of innocent lives. As this unfolds, the anti-Islam propagandists proclaim “See — we told you so — it is not propaganda but the reaction justifies and bears testimony that Muslims are violent.” The majority of Muslims all around the world condemn such violence but their voices are drowned by the actions of the fanatics. In the end when all is said and done, innocent lives are lost and Islam stands maligned. The hate-mongering freedom of speech zealots and the fanatics win — humanity loses.

The recent movie which insults Muhammad, the prophet of Islam, has caused great grief to Muslims all around the world. But, being a Muslim, what has disturbed me even more is the fact that innocent lives are being lost because of the violent protests by Muslims. It is more disturbing because the prophet of Islam bore many more insults in his life and not a single life was lost. A study of Muhammad’s life shows vividly that his opponents went to great lengths to insult him. Once a man walked up to him and grabbed and pulled him by his beard. Once, while in prostration during worship, the entrails of a camel were thrown on his back. Once a man grabbed him and pulled his cloak so hard that it left a mark on his body. Many of his opponents abused him verbally. None of these insults resulted in a retort, and no punishment was prescribed to any of these miscreants.

The fact of the matter is that Muslims all around the world are condemning the wake of violence in reaction to the anti-Islam movie. Especially in the West, Muslims are doing all they can to present the true face of Islam. For example, the Ahmadiyya Muslim Community just finished a nationwide campaign entitled “Muslims for Life.” The goal of this campaign was to collect 11,000 pints of blood to help save 33,000 lives to honor the victims of 9/11. This is being done because Islam teaches that “to save a life is as if all of humanity has been saved.” Let not our society become even more polarized and obscure a rich humanistic tradition within Islam.

In a world of increasing volatility, this anti-Islam movie exasperates the growing tension and mistrust between Islam and the West. This propaganda comes at a time when the Islamic world views the west as at war with Islam. Muslims must recognize and respond to the anti-Islam propaganda in the best of manner just as their faith demands. There will be those who in the guise of freedom of speech incite hatred and violence. But to fall prey to their inciting would be a grave error — to which Muslims seem to fall for time and again. Muslims — you must use your right to be offended, to be hurt, and to protest peacefully. Muslims — the Koran instructs you to uphold and protect life, not take it. Muslims — the Koran instructs you to argue in the best of manner. Muslims — the Koran tells you to be a source of mercy and kindness to humanity. Muslims — the riots must drain out.

Waqas Malik is the Vice President of Ahmadiyya Muslim Community in Seattle. He is a frequent speaker on Islam in the greater Seattle area. He can be reached at [email protected]

Waqas Malik is the Vice President of Ahmadiyya Muslim Community in Seattle. He has presented at the University of Washington, and at schools, mosques, temples, and churches on diverse topics concerning faith and the philosophy of the teachings of Islam.