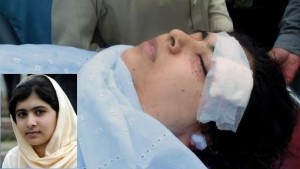 On Oct. 9, a teenage girl in Pakistan’s Swat Valley, which has been under Taliban rule for years, was brutally shot in a school bus. Malala Yusufzai was an outspoken girls’ education-rights activist and had been a persistent thorn in the side of the marauding Taliban.

As reviling and abominable as this act is, far greater is young Malala’s courage that has captured the world’s imagination. Malala’s fight with the Taliban is not just for girls’ education rights, but for the very soul of a religion and the humanity that has been dealt a shock by this unthinkable crime.

In an era known for its backward rituals across the Arabian Peninsula and much of the world, some 1,400 years ago Islam and the prophet Muhammad set out to carve a fundamental shift in the status of women and women’s rights.

The Quran honors women by giving the only by-name examples of the piousness of two women only: Mary, mother of Jesus, and Aasia, wife of the evil Pharaoh, who veiled her faith from him.

Chapter 19 of the Quran is named “Maryam,” or Mary. The Quran, in its myriad references to Jesus, terms him as “Ibne-Maryam” or “Son of Mary” to accord him with the virtue and dignity of his holy and honorable mother.

In the following narrative, I will briefly touch upon three highly revered and venerated women in the prophet’s life who stand aloft in Islamic history: Lady Khadijah, Lady Ayesha and Lady Fatimah. The first two were his wives and the last one his daughter.

In his youth, prophet Muhammad himself took up employment under a wealthy female trader by the name of Khadijah. Muhammad’s diligence and honest approach to work earned him much admiration with his lady-boss. The two eventually married.

After Muhammad’s proclamation of prophet-hood from God and the declaration of his mission to reform religion and morality, the two immediately faced intense persecution at the hands of the Meccans.

Despite this backlash, Khadijah remained an ardent supporter of her husband’s cause. They rallied for ending the abominable practice of burying newborn girls and propagating rights for women to marry by choice and inherit property.

When the Muslims were intensely persecuted in Mecca for 13 years, Khadija had fallen ill. Due to the horrid living conditions from the persecution, which included a social and economic boycott, she died shortly after.

She holds a special status as one of the first believers of Islam and is known to have played the crucial role of counselor in most critical decisions by Muhammad given her wisdom, knowledge and leadership.

Ayesha married the prophet Muhammad when he was well within his role as a prophet. She is characterized as an ardent supporter and activist of his mission up to even partaking in the battlefield.

She is renowned for her public speeches, political activity and religious grounding. She is also known as a rich learner and educator with a penchant for science.

In one well-known historical reference, it is narrated that the Muslims of the time learned half their religion from Ayesha. After the prophet’s death, she continued with her leadership in propagating Islam and women’s rights through her public speeches and political activism.

Last but not the least is the prophet’s daughter, Fatimah. Like Khadija and Ayesha, Fatimah, too, took up a strong role in support of her father’s divinely inspired campaign. She is particularly renowned for her piety and for leading a life of exiguous means, even poverty.

Her piety has such strong tradition that a Quranic recitation undertaken by Muslims after the conclusion of each prayer — the Tasbih-e-Fatimah — is named after her.

Fatimah, who died a few months after her father’s death, is revered and venerated by Muslims for her special closeness to her father, her piety, and her steadfastness through the hardships she endured through life. A great dynasty from her progeny known as The Fatimids is also named after her.

Please join me in prayer for the speedy recovery of Malala Yusufzai and the resumption of her critical mission — so that she may be blessed with the same spirit as that of Khadija, Ayesha and Fatimah, whom she no doubt revers, and that she defends her religion against its usurpers.