Originally Published in The Oshkosh NorthWestern 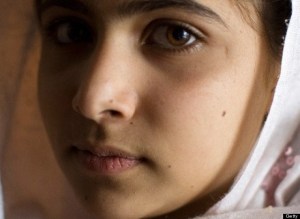 Every time I read to my three year old daughter, I am trying to increase her passion for education. I pray that one day she will use her education to make a real difference in the world by helping humanity achieve peace. I am pretty sure that the father of Malala Yousefzai – Pakistani teen activist – probably wanted the same for his daughter. Instead, she is fighting for her life after the Taliban brutally shot her for daring to publicly speak out against them and for endorsing education.

Most 14 year old girls do not have to worry about whether or not they can go to school but Malala’s case was different. She lived in Swat, an area where the Taliban had bombed schools and closed them down. She was running a campaign for the right of girls to education and was speaking out against the Taliban.

Her courage was seen by the Taliban as a threat to Islamic sharia, which in their own perverted interpretation of faith meant the death sentence. Hence, they tried to silence her.

It is a disgrace that Malala had to fight for rights that were already promised to women by Prophet Muhammad 1,400 years ago. It is even a bigger disgrace that she had to wage this struggle against a system of people who claim to be followers of Islam. In the pre-Islamic era, it was not uncommon to bury young girls alive because they were considered to be a dishonor for the family. Woman was considered property that could be used, discarded and even inherited. With the advent of Islam, these same women were able to inherit property themselves. Women were given the equal right to vote, education and citizenship.

However none of these rights exist for women and young girls in places where Taliban-like regimes have spread their draconian ideology.

Malala’s accomplishment for winning a national peace prize along with other accolades is unprecedented in comparison to the current state of her country. The World Bank Development Report 2012 reported Pakistan’s female literacy rate to be holding at 40 percent whereas the US rate is at 99 percent. Violence is rampant across the country, especially against women, a rise from 7,571 in 2008 to 8,539 in 2011. The situation is even bleaker in rural areas.

The answer lies in their literacy rate. The education of women is crucial to the literacy of a whole nation. It runs concordantly to a teaching of Prophet Muhammad where he equated the status of a mother to paradise. A study in Lancet Journal 2010 found that 50 percent of all reduced child deaths is related to better education of women. The deaths are reduced by increasing the resources-to-children ratio and better understanding of disease. Healthy children can then go on to build a stable infrastructure of society where extreme ideologies have no place – case in point, the Tehrik-e-Taliban Pakistan (TTP).

This story should not be discounted as just another sad statistic in a country like Pakistan. Imagine if your daughter was sitting on a school bus waiting to go to school with her friends and two men ask for her name and then shoot her in cold blood. It is too hard to think about such an ordeal but it is real for people like Malala’s family. My job as a father is to keep on reading to my daughter because I want more lights like Malala to be lit in the future so that we can eventually achieve world peace.

Ahmed Khan received his BS in Computer Science from University of Maryland, Baltimore County and works as an IT Consultant in Oshkosh. He has published in various local and state newspapers and is an award winning member of the Muslim Writers Guild of America. E-mail [email protected]
Ahmed Khan education humanity Islam Malala Yousafzai Oshkosh Northwestern Pakistan Taliban Women
FacebookTwitterRedditEmailLinkedInWhatsApp

Please remember, Taliban and Al Qaida are on the side of UN peace keepers. Don’t you see how they’ve kept them busy in the past so many years, untill eg Iraq and Afghanistan have been razed. And the ARAB SPRING . . . Let’s see how long we have to wait for them to recover from their anihiliation.