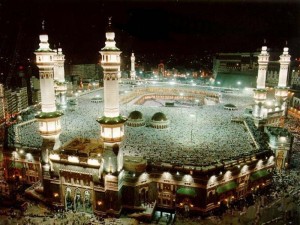 We all know of the upright Patriarch and “Friend” of the Divine (4:126), Abraham (on him is peace), of whom we find an honorable mention in almost every religion. So what’s so special about him?

Well, the answer lies within a special commemoration being observed these very days by over one third of the world’s population; ‘Eid ul Adha or the honoring celebration of the power of sacrifice. Literally translated though ‘Eid (‘Ain Ya Daal) means to reproduce and even excel, so it actually means to reproduce and excel in the selfless life giving act of sacrifice. What sacrifice is one asked to emulate? This brings us back to our central figure, “our father” Abraham (22:79), who is recorded in multiple Holy Books to have seen an unusual dream from God Almighty (apparently) of sacrificing his first born. Frightening isn’t it? Not to Abraham though, because he always inclined towards the goodness inherent in everything. Not only did he believe this unique message was from God, The Patient, in the guise of a dream, but he took it seriously and with boldness bravely materialized God’s gruesome command (as he interpreted). But he wasn’t the only one, when asked about his thoughts about the dream, his beloved adolescent first born, whom he prayed sincerely to have (37:101), faithfully and patiently proclaims, “Do as you are commanded (37:103)”. Completely resigned to the will of his Father in Heaven, the Wise Creator, Abraham’s first born becomes a strong devout soldier by submitting without falter to the Commander in Chief in Heaven. The identity of the first born is irrespective of the underlying lessons, which are many.

This famous story echoes across manifold religions, but why, what’s the point? The chief principles to take home are those of faith and obedience which gracefully stem from the titanium branch of sacrifice and ultimately from the intoxicating trunk of love. Faith that the odd dream (interestingly not verbal revelation) was in fact from the apparently merciful God. Obedience to the directive of God regardless of its shocking abnormality. Sacrificing from that which you love most in this life. Following this tree of virtues, one finds how to completely purify the self as well as devotion consistently until the only worthy fire that remains is God itself, the Source of all sources. This is why God suddenly stopped Abraham from actually fulfilling the dream. God, the All Aware, saw that Abraham placing God’s love above his own was literally about to pierce the sharp blade into the tender flesh of his young beloved son and abruptly announced, “‘you have surely fulfilled your dream’” (37:106). Thus did God reward those who inclined towards and performed goodness no matter how strange the command from on high. That was indeed a manifest trial and God ransomed him with a quaking sacrifice. When Abraham did finally sacrifice his first son leaving him by God’s command in the harsh barren desert of Arabia, his blessed and strong wife Hagar (God is pleased with her), among the ones sacrificed, quietly obeyed her husband and in essence her Creator. This inspiring woman is the hidden strength behind this enchanting true story and is, unfortunately, much too overlooked. She could have said no justifying her disobedience through the apparent cruelty of the act, but she said no, instead, to disobedience and comfort. Would any of us do the same? I think we all know the answer to that. So, God, the Most Forgiving, tells us to recall this faith shaking tribulation simply through prayers and the sacrificing of a lamb which, in the language of dreams, symbolizes your child.

Locally, 150 Muslims who believe in the two Messiahs, Jesus of Nazareth and Mirza Ghulam Ahmad of Qadian (peace upon them both) gathered at the House of Peace (Baitul Aman) in Meriden to commemorate this very spirit of sacrifice on Friday Oct. 26.

Stepping into God’s House of Peace one heard the pure, melodious chanting of God’s praises; “God is the greatest, God is most great, no deity exists except God, God is the greatest, God is most great, and unto God alone belongs all forms of worship”. The Imam (from Ghayana, Africa) humbly stands up and recites the Islamic testimony and the Opening Chapter of the Holy Quran. Delving without delay into the famous story of Abraham (p.b.u.h.), our father, we once again listen intently to this great ode of sacrifice. Tears washed away all attachments (whether superficial or profound) besides God as we heard the passionate story of chivalry made by a seemingly poor but holy family; Abraham, his son and his wife. We closed the sermon with collective silent prayers and proceeded to jubilantly greet each other with tight embraces and warm wishes of a blessed happy ‘Eid.

I’d like to finish with a few lines of my poem about the essence of ‘Eid:

If only we of different races and creeds
Would slaughter our inner child of arrogance and greed
We might live in loving happiness together,
Like the family we were supposed to be

May God be your reward and peace.