Originally Published in The Richmond Times-Dispatch 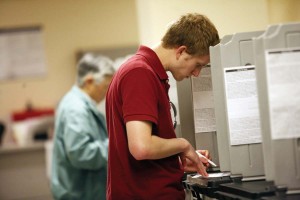 The presidential debates are history, leaving us cherishing Big Bird, binders full of women and horses and bayonets.

America’s future now rests in the voters’ hands. Yet, about 90 million of us won’t vote this November — a trend that stretches back for decades. Americans have not broken the 60 percent voter turnout barrier for a presidential election since 1968.

And I’ve certainly played my part in this abysmal turnout. This November is my first time voting in a presidential election, despite my third opportunity to do so. So what changed my mind? The Founding Fathers? The high stakes? The barrage of political ads airing in my swing state of Virginia?

The answer is none of the above. I find political ads annoying. Let’s not kid ourselves — stakes are always high in a presidential election. And while I love my country, something about our Founding Fathers shedding their blood to vote while destroying Native Americans takes the air out of my sail.

So why vote? Well, let me explain with an analogy. Think, for a moment, about your religious beliefs. Perhaps you are a conservative Christian. Maybe you’re a reformed Jew. You could be Catholic, Muslim, Hindu, Mormon, a pagan, Buddhist, or perhaps an atheist. Now, contemplate your reaction if you went to the polls to vote but were turned away on account of your faith or faithlessness — and nothing else.

Now, let’s add some salt to the wound. Imagine if you could vote, but it meant you had to sign a form first, declaring your own heresy. For Christians the form might declare, “I, ______, hereby declare Jesus Christ to be false and heretical.” (God forbid.) Muslims might be forced to write, “I, ______, declare that Muhammad was not a Prophet of God.” (Again, God forbid.) Atheists may have to declare, “I, ______, declare that I believe in God as my savior and consider anyone who rejects God to be a liar destined for hell.” (God…er…the Constitution forbid such compulsion.) Yet, if that were all it took for you to vote, would you do it?

I didn’t think so.

But as a member of the Ahmadiyya Muslim Community, this is the reality I would face at the poll booth in Pakistan — along with roughly 4 million other Pakistani Ahmadi Muslims. For some 30 years now, Pakistan has effectively disenfranchised Ahmadi Muslims solely because we believe the long-awaited Messiah has come in the person of Mirza Ghulam Ahmad. Rest assured, I am not about to preach dogma to you. But this background puts in perspective this grotesque human rights violation.

For Ahmadi Muslims to vote in Pakistan, we must fulfill one of two federally enforced requirements. Option one: Declare yourself a kafir, i.e., a non-believer, a non-Muslim. Doesn’t seem too enticing? Option two isn’t much better: Declare Mirza Ghulam Ahmad, the Messiah and the founder of the Ahmadiyya Community, to be a false prophet. If that also isn’t alluring, a third option exists: Don’t vote and let the political process remain in the hands of those who legitimize state-sanctioned persecution of religious minorities.

And the consequences have been devastating.

Voter disenfranchisement has enabled Pakistan to pass anti-blasphemy laws that prescribe fines, prison time and death for Ahmadi Muslims — as well as Christians, Hindus, Shias and atheists — who “offend” the majority. In the past decade, this growing persecution has resulted in more than 3,000 civilian deaths from terrorists, every single year. What began in Pakistan as systemic persecution of Ahmadi Muslims 30 years ago has now exploded (pun intended) into an annual 9/11.

Our government in the United States is far from perfect, but at least we can vote without the proverbial (or literal) gun to our heads. So I say to the 90 million Americans who won’t vote this year: Don’t take this right for granted. If nothing else, vote for the simple reason I am voting in this election — because I can.