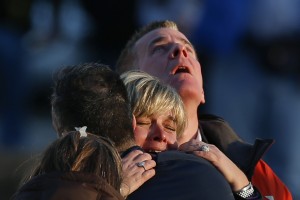 As we prepare to lay 26 souls to rest in Newtown, Conn., countless are left behind, alone. As long as good people have existed, bad things have happened to them. And as long as religion has existed, believers and non-believers alike rightfully ask, “Why does God let bad things happen to good people?”

Islam’s answer to the question of suffering does not serve to “justify” or mitigate the pain associated with the horror of losing a child. Nor does it serve to apply blame to any person, entity, or worldview. Rather, it provides a perspective that directly answers—why do bad things happen to good people?

First, suffering is not some experience that exists on its own. Rather, it is intimately intertwined with our growth as a species—with the experiences we call pleasure. Recognition of suffering delineates between good and bad, pleasure and pain. As the old saying goes, necessity is the mother of innovation.

That is, the greater degree of self-awareness we achieve, the greater degree of loss and gain we recognize. For example, imagine a grown, mature adult, devastated at being sent to his room for misbehaving, instead of being allowed to play outside. This would seem obscure. Now, imagine the same scenario but the person is my 3 year old. For a 3-year-old child’s awareness, this behavior makes more sense.

Likewise, imagine a person who loses his residence, mode of transportation, and anything more than the clothes on his back—but carries on as if nothing has changed. This would seem obscure. Now imagine the same scenario but the person is an infant child. For an infant child’s awareness, this behavior makes more sense.

Suffering is painful, but not inherently unjust. It would be unjust only if it existed on its own, with no complimentary level of pleasure. Without suffering, pleasure would also cease to exist. Such a scenario in which we are all equal—knowing neither pleasure nor pain—is counter to reality. With individuality and intelligence comes recognition of gain and loss—and thus recognition of pleasure and pain. The two are inseparable.

But what is God’s role in this?

Well, for the atheist this is a non-issue. God cannot be blamed because God does not exist. Chance created everything; chance determined that a random person would have experiences that would motivate him to murder 26 individuals who per chance were his victim on that fateful day. That is not to say atheists even slightly endorse, justify, or anything less than condemn this horrible act. It merely points out that if God has no role, then any pleasure or suffering we understand is mere chance. The only escape to end the cycle of pleasure and pain is when we all ultimately lose consciousness and die.

For the believer, however, God plays a substantive role. Prophet Muhammad, who suffered the deaths of 11 children, taught that when bad things happen to good people—or to any people—to maintain patience while expressing grief, and to maintain trust in God. In a famous letter he wrote to one of his companions, M’uaz bin Jabal, when M’uaz’s son died, Muhammad wrote, “If you get to know, how much return and recompense has been granted to you for [your loss], then this loss would appear very meager in your eye.”

In other words, for believers, this life is both sacred and transitory to the next life, in which pleasure exists independent of suffering, and we will be recompensed for what was taken from us in this life.

None of the above mitigates the pain and suffering every person—particularly the family members—feels after the Newtown tragedy, or after any tragedy. Nor should it. But it does explain why suffering exists—as a byproduct of our increased awareness and increased pleasure, not independent of it. For the believer and atheist alike—death is an escape from this cycle of pleasure and pain. But for the believer, death is not an end, but a transition to an eternal life in which pleasure reigns supreme, and pain is left behind, alone.

Qasim Rashid is a national spokesperson for the Ahmadiyya Muslim Community USA. Follow him on Twitter @MuslimIQ .