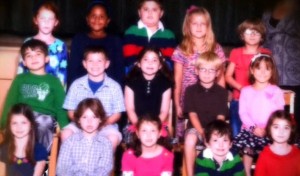 I never got a chance to meet the Sandy Hook 20. But if I had, I’d ask about their favorite food, their goals, their views on the world, what makes them laugh, and if they were happy.

I’d tell them that if Jesus met them, he’d remind them they belong to “the kingdom of God,” if Muhammad met them he’d hug them, if Buddha met them he’d say they are representative of the entire society.

If they asked me what proof there is of an afterlife, I’d say to think about this life. I’d say that it’s less remarkable to think of an afterlife after realizing the extraordinariness and unlikeliness of our first birth. I’d also say that it would be very strange for God’s prophets – whom their society overwhelmingly acknowledged as being truthful before they claimed to be a prophet – to lie about an afterlife. If they asked why – if an afterlife exists – we could not communicate with our loved ones, I’d say to consider: “Your creation and your resurrection are only like the creation and resurrection of a single soul … ” (Qur’an 31:29). In other words, I’d say that there was a time when they did not exist – unlike their parents. I’d say there was a time when they were in their mother’s womb, and for a time after their birth, but they were unaware of the world – unlike their parents. I’d say despite their parents being aware, their parents could not communicate with them for a long time. I’d say that if this is the case in this life, is it that hard to think of it in the next?

If they asked me why bad things happen to good people, I’d say that just as every joy they experience is not a reward for a previous action of theirs, neither is every suffering a punishment. I’d say that no child is healthy simply because their parents were good people, so let’s remember this idea in the opposite scenario. I’d also say that if our awareness of happiness and sadness increases as we age, our happiness would be far greater in the afterlife – because our consciousness would be far greater. If they were to say our sadness would also be higher, I would say that bad people, and bad events, only exist in this life – not the afterlife. If they asked me how they – or their loved ones – should deal with the tragedy of losing a loved one, I’d remind them of the reasons for believing in an afterlife. And I’d say that this is one reason why Muhammad, who patiently endured the loss of 11 children, once told a companion who had lost his son, “If you were to know how much you have earned for [your loss], this loss would appear minor in your eye.”

Afterwards, I’d tell them that I’d say the same to their classmates at Sandy Hook.

And I’d say next time we meet, it will be for a much longer, much more permanent time.