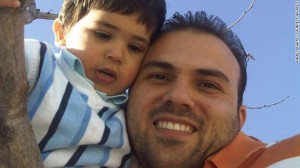 Saeed Abedini, with his 4-year-old son, was sentenced to eight years in an Iranian prison.

When will Iran’s government and clerics stop running from the truth that their religion – which they call Islam – would be unrecognizable to the Prophet Mohammed?

On the mere allegation that American pastor Saeed Abedini evangelized Christianity, Iran threw him in front of a member of its Revolutionary Court, whom many have called a “hanging judge.” Abedini now faces eight years in prison, which is nothing short of reprehensible, immoral and cowardly.

If Iran’s purpose was to protect what it thinks is Islam, it has failed.

In 1902, Mirza Ghulam Ahmad, founder of the Ahmadiyya Muslim Community, courageously declared, “Religion is worth the name only so long as it is in consonance with reason. If it fails to satisfy that requisite, if it has to make up for its weakness in argument by handling the sword, it needs no other argument for its falsification. The sword it wields cuts its own throat before reaching others.”

Thus, in using force to counter Abedini’s alleged evangelism – an oppressive act alien to Islam – Iran’s religion cuts only its own throat.

If Iran’s purpose was to silence Abedini, it has failed. More people worldwide now know of him, his message of Christianity, his struggle and his passion than ever would have otherwise. Iran has given Abedini a loudspeaker that he never could have built on his own. Thus, while trying to silence Abedini’s message, Iran’s religion silences only itself.

If Iran’s purpose was to honor Prophet Mohammed, it has failed. The message it has given to the world is one of intolerance and fear, characteristics alien to Mohammed’s example of love and pluralism. Iran’s act does more to dishonor the prophet than Abedini ever could. Thus, by cowardly, hypocritically and ignorantly demonizing Christianity, Iran’s religion makes only itself look hideous.

As a practicing Muslim, I’m not sure what religion Iran practices, but it has nothing to do with the Islam that my Prophet Mohammed taught.

And what exactly did Mohammed teach?

My Mohammed declared in writing to St. Catherine’s Monastery at Sinai, “This is a message from Mohammed ibn Abdullah, as a covenant to those who adopt Christianity, near and far, we are with them. Verily I, the servants, the helpers, and my followers defend them, because Christians are my citizens; and by Allah! I hold out against anything that displeases them. No compulsion is to be on them. … The Muslims are to fight for them. … Their churches are to be respected. … No one of the Muslims is to disobey this covenant until the Last Day.”

My Mohammed championed the Quranic commandment to protect all houses of worship, including churches. “Permission to fight is given to those against whom war is made – because they have been wronged. … Those who have been driven out from their homes unjustly only because they said, ‘Our Lord is God’ – And if God did not repel some men by means of others, there would surely have been pulled down cloisters and churches and synagogues and mosques, wherein the name of God is oft commemorated” (22:40-41).

My Mohammed returned to Mecca peacefully and victoriously and, citing Prophet Joseph’s noble example, graciously forgave all his persecutors. While Mecca exiled Mohammed only for his faith, Mohammed now protected the rights of all to stay in Mecca regardless of their faith. But with one condition: that freedom of conscience remain free for all people, Muslim or not.

Had Iran followed Prophet Mohammed’s Islam, no such “hanging judge” would exist, no such eight-year prison sentence would exist, and no such restrictions on Abedini’s peaceful preaching would exist.

So give it a rest, Iran. You’ve been running long enough. Your so-called religion honors neither Islam nor Prophet Mohammed, nor will it ever silence other faiths.

about CNN do in Iran Islam mka Mohammed my pastor take U.S. what would
FacebookTwitterRedditEmailLinkedInWhatsApp