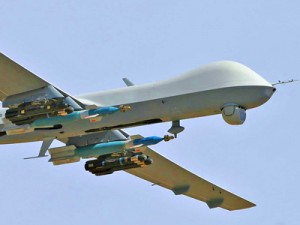 Originally Published in The Baltimore Sun

American drones have been operating since 2004 in the Federally Administered Tribal Areas of Pakistan, my motherland. But on Nov. 21, a drone fired missiles at a religious seminary in Hangu, a settled area in mainland Pakistan, killing five men in addition to a top leader of the pro-Taliban Haqqani network.

Pakistanis are angry. Imran Khan, the chairman of the Pakistan Tehreek-e-Insaf party, which has publicly declared the U.S. aid to Pakistan a “curse,” is calling for the U.S. drones to be shot down. His activists have already choked NATO supply routes and are now threatening to march toward the U.S. embassy in Peshawar.

Before this turns into another Benghazi, let’s ask a question: Why, despite such blatant moral — and not so blatant legal — affronts, do two out of three Americans support drone strikes against terrorists abroad and have little desire to quell them?

The answer is clear: oversimplification.

Lamenting “civilian deaths” is an oversimplified argument for a Pakistani, just as “hunting down terrorists” is for an American. This oversimplified narrative is a gift of politicians from both countries, who seem to have taken an oath to tell the half-truth.

The U.S. claims to use drones to eliminate terrorists and limit civilian casualties. But for every militant killed by a U.S. drone strike, 50 civilians perish, and the U.S. military suffered over 75 percent of its casualties in Afghanistan only after drone strikes surged in 2008. Claims that drones weaken al-Qaida are also unproven. (We didn’t fight al-Qaida around the Arabian Sea after 9/11 to find them wielding terror around the Mediterranean Sea a decade later.)

Similarly, the Pakistani government publicly denounces drone strikes but privately endorses them and downplays the rate of civilian casualties. And there is little disagreement about the impetus behind Pakistani Prime Minister Nawaz Sharif‘s recent visit to U.S.: His real agenda was pro-financial aid, not anti-drone — $1.5 billion in U.S. aid has been frozen since 2011 when relations between the two countries strained over Osama bin Laden’s killing.

By killing civilians, is the U.S. administration not creating more Faisal Shahzads, the failed Times Square Bomber, who singled out drone strikes as his motivation for the bombing attempt? Aren’t leaders setting a bad precedence for other countries and dangerously lowering the threshold to wage drone warfare? Where is — forget about an apology and compensation — a broader concern over the death of civilians, whose families recently sought justice before Congress, only to face silence from a handful of lawmakers (a majority of whom didn’t even attend the hearings)?

Question Pakistan on the duality of its public vs. private stance on drone attacks, its own Army’s rate of civilian casualties when it launched an offensive against the Taliban in 2007, and its politicians’ desire to appease militants under the label of “peace talks,” and you will hear a lot of emotion, but not a rebuttal.

No surprise, Americans give a tacit approval to drone strikes, and the administration, with every missile, continues to sow seeds of hatred against its troops, its embassies, its people.

Imran Khan’s party, which controls the drone-prone area, claims to be the only ones telling the truth — the whole truth and nothing but the truth. But then I stumbled upon the official website of the Khyber Pakhtunkhwa province, where Khan’s party is in power, and a sentence in small font toward the bottom of the page gave it away: “This website has been designed and developed with the support of the USAID Pakistan.”

My motherland is being bombed by my adopted homeland, my people are in the thick of bullets and bombs sanctioned by most Americans, and we all have only half-truths to guide us.