Originally published in The NorthWestern 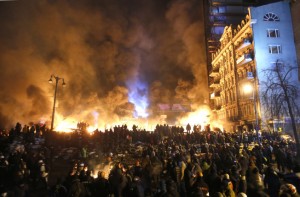 If you look at the headlines of any newspaper today, you will notice at least one of them being about Russia. President Putin – current Russian incumbent – has become the center of western vilification because of his approval and decision to allow for the annexation of Crimea from Ukraine into Russia without any legal recourse.

But no one, neither from the G7 nations (US, Canada, France, Italy, UK, Germany, and Japan) nor Russia is paying any attention to the volatility that is replacing all peace that currently exists in the world today.

The brutal slaughter of 100,000+ Syrians, the tumultuous situation in Egypt and Iraq, the tribal warfare in Africa (i.e. Sudan and Nigeria), mistrust between China and Japan, daily terrorist attacks in Pakistan and Afghanistan, and bitter rivalry between North and South Korea are just some parts of the volatility to which I refer.

World peace must be a non-negotiable issue regardless of any country’s self-interested objectives. I understand that Russia and its leaders are overstepping their case for annexing a piece of land that legally belongs to Ukraine. It is also well understood that they have breached their sovereignty without their direct approval and their only justification for doing so is to protect the “Russian speaking” people living there.

I do not think this is a good excuse either, but at the same time it is very hypocritical for the US to dictate Russia to lay off breaching Ukraine’s sovereignty; we did the same thing in Iraq and Serbia. In fact, the US invaded Iraq in the second Gulf war without the approval of UN and most of its NATO allies.

All of these past geopolitical mistakes have set a wrong precedence for other countries to follow.

Unfortunately this is only the symptom of the main problem which is the situation where no country today is following the basic guidelines of justice that can lead a pathway to peace in the world.

The basis for these guidelines is so that every individual right of a country or society is protected. It also creates an egalitarian system for the whole world to follow so that everyone is treated equally and justly.

I will attempt to lay out a few of these guidelines here:

• No country should look upon another country’s wealth or natural resources.

• All military ambition should be to establish peace, rather than to fulfill vested interests.

• Once a transgressive party has been subdued by other military powers, no revenge and no imposition of restrictions (i.e. economic sanctions) should be on them, instead they should be given assistance to return back to normal.

• Every effort should be made to give the poorer nations their due status.

These guidelines actually came from the book “World Crisis and the Pathway to Peace” (www.alislam.org/library/books/World-Crisis-and-Pathway-to-Peace.pdf). It is a composition of a series of lectures on world peace given by the current Khalifa of Islam, Mirza Masroor Ahmad of the Ahmadiyya Muslim Community, at the British Parliament 2008, Military Headquarters Koblenz Germany 2012, UK 9th Annual Peace Symposium 2012, Capitol Hill Washington, D.C 2012, and Hamburg, Germany 2012.

The book also comprises of personal letters written by Ahmad to world leaders like Pope Benedict the XVI, President Barack Obama, Prime Minister of Canada Stephan Harper, and UK Prime Minister David Cameron. The message of the letters was a simple way of letting them know that it is their responsibility to set the right example for creating this pathway to peace.

If these guidelines are not taken seriously by world leaders, then the alternative is the current crisis worsening to a more serious and bigger conflict. Ahmad states in his lecture that empty gestures are only a means of deceiving everyone from what is really going on: “where decisions are made on the basis of the pressure or the lobbying of the major powers, as opposed to just and truly democratic means, then such speeches are rendered hollow, meaningless and serve only as pretense to deceive the outside world.” He makes it a point to conclude in some of his lectures that these actions will eventually lead to a nuclear conflict – devastation for the entire world.

We as a nation can take the first step in the right direction by dealing justly with others and to sincerely help other countries without the desire to fulfill our vested interests. Instead of vilifying President Putin, we can work with him to set this pathway to peace for others to follow.