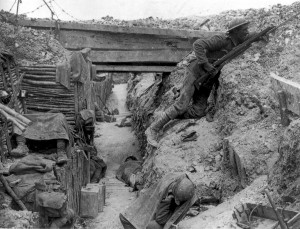 World War I. When was that?

We are so caught up with the problems in the world today that it is hard to believe that the first global war started 100 years ago, in 1914. Put aside present concerns, or better yet, put them in view, and let’s look a century back. I think you’ll be surprised to see major parallels.

There aren’t any WWI veterans alive anymore. But when I was a primary school student — 30 years ago to be exact — I had the privilege of meeting a few. My first interaction was at an evening coffee meeting of the American Legion. The Legion members, some of whom fought in WWI, invited me, a first-generation immigrant and a Muslim-American, to receive the first prize for a youth essay contest on what it means to be an American. My second interaction was when I was learning the ropes — literally — learning to tie knots as a junior naval cadet. It was glamorous for us 4-foot-high city kids to march tall in sailors uniforms alongside the real veterans at the Veterans Day Parade in New York. In both instances, the WWI veterans were the oldest folks in the group, and they were generally kind-hearted men who could recount with fine detail their battle stories and campaigns. For a comprehensive understanding of WWI though, there are letters between soldiers and their loved ones, songs, rare film footage, and a myriad of books, documentaries and movie re-enactments. And at their core, the documents reveal grim realities and major upheaval — similar to what we see unfolding today.

The first striking parallel between WWI and the present is that there was a crossroads of old and new weaponry. On the one hand, the war still witnessed one-on-one combat with bayonets and rifles of the type used in the American Civil War. But the Great War, a term WWI is still known by, debuted heavy artillery, aerial guns and torpedoes. The Allies rolled out the first tanks, but they were still followed up by old-school cavalry brigades. There was also the advent of large-scale trench warfare — thousands of miles of it along the Western front of Europe — delineated by barbed wire and the stench of dead bodies.

On the seas, there were now grand battleships to replace the old armada. The Germans gained naval superiority for a time with their submersible “U-boats,” which were a forerunner to the true submarine. On the electronic front, there were key advances in wireless cryptography and sonar. Many innovations were, however, ghastly and non-conventional, including the use of flame throwers and gas attacks.

Today, we are also at a crossroads in war capabilities. While we still practice war games with what we inherited from the last two world wars, our new weapons make the previous ones look like child’s play. The chemical and biological arsenal, actually developed by us and the Russians, is mind-boggling. We now also have far superior nuclear weapons in the form of the hydrogen bomb, which is at least a thousand times more powerful than the atomic bombs unleashed on Japan. Add to this the use of robotic drones and the ability to destroy people on a mass scale has once again climbed to a new level.

Another parallel is the conundrum of why the world went to war in the first place. The apparent spark in 1914 was the assassination of Archduke Ferdinand of the Austro-Hungarian Empire by the self-proclaimed terrorist group the Serbian Black Hand. For the soldier in the battlefield on both sides, however, there was much confusion and little in the way of purpose. The sentiment is captured in a WWI British soldier’s infamous marching song, “We’re here because we’re here.”

Behind the propaganda, WWI was in reality like many wars preceding it, as well as the more devastating one succeeding it — a war to settle old scores. WWI came just about 40 years after the Franco-Prussian war. It was yet another showdown between the German imperial underdogs and the established imperialists of Western Europe, or, from another angle, a fight between German socialism and British and French capitalism. It was also an epic clash between the ethnic Tueton (of Germany) and the Slav (of Russia). Today, major conflicts still loom high — now between Russia and the United States. A hot spot that could spark another world war is Syria, where fanatics akin to the Black Hand have gained ground. Or perhaps it could be Ukraine or a new region under dispute. The underpinnings of strife and self-interests appear to be similar.

So what’s the solution to prevent history from repeating itself?

Let’s look to the great sages.

As a Muslim, I take lessons from the founder of Islam, the Prophet Muhammad, who lived about 1,400 years ago. The Prophet taught that war was to be avoided to the greatest extent. And even when you are forced to defend yourself against aggression, fight only when provoked. Do not be the first to draw the sword. It is ironic that the practice of many Muslim clerics today is diametrically opposed to the Prophet’s teachings.

When war was inevitable, there were also clear rules of conduct. The Muslims were told to adhere to key humanistic principles. Do not attack civilians. Do not destroy occupied lands, such as by cutting down trees or burning crop. These instructions were very different from the scorched earth policy of the Russians in WWI, who burned and destroyed the land from which they retreated — even in their own country.

Do not starve the enemy. And in particular, do not harm any religious places of worship or their priests. Prisoners of war should not be maltreated. In fact, they were to be clothed and fed in the same manner as the Muslims. And their release should be expedited.

The question is why show compassion to the enemy? Why not starve them to the brink of death or imbibe fear in the hearts of captured civilians?

Was it a sign of weakness? Or simply a bad move?

Just the opposite. Indeed, the short-term goal was to defeat the opposing side. But the end game was to do away with age-old conflicts and bitter hatred among factions. Compassion, once you have gained the upper hand, is a divine strategy for winning an enemy’s heart so that war could end for good.

It is interesting that the instructions of the Prophet from over a thousand years ago reverberate in the 1949 Geneva Conventions, which were drafted in the aftermath of the Second World War.

Will the testimonies of war veterans about the horrors of the previous world wars prevent us from repeating another performance? Even though the number of lives lost in WWII was greater, the statistics for WWI are still staggering: 37 million killed and 20 million wounded. Whether related or not, a flu pandemic at the end of the war killed another 20 to 40 million.

Coming back to 2014, 100 years later, do we recognize the parallels we share with our departed veterans of WWI? Our greatest threat seems to be our own destructive abilities and the lingering conflicts that could easily ignite. What will we do to avoid war to the greatest extent possible? Or will we be the veterans whose testimonies are being remembered a century later?