Originally published in The Daily Herald 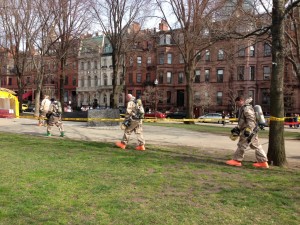 The Boston Marathon is the world’s oldest annual marathon, and ranks as one of the largest and most popular events of its type worldwide. Tragedy struck this grand event last year when two bombs went off near the finish line, killing three and injuring around 275 others.

Condolences and condemnations poured in from all around the world. American communities joined hands in expressing their sympathies with the families of those killed or injured. Was this a terrorist plot against America or the act of crazy individuals acting on their own? Why would anyone want to attack innocent bystanders and participants at a sporting event? As questions were raised, Boston remained in deep shock.

What followed was a display of great police and intelligence work that culminated in our nation’s largest manhunt at home. Tamerlan, the younger of the two Tsarnev brothers subsequently implicated in these attacks, admitted being influenced by “radical Islam.” He reportedly stated that the bombings were undertaken as a payback for attacks on Muslim lands. He claimed to be influenced by Anwar Awlaki, the same al Qaeda cleric who inspired the Times Square bomber three years prior. Though no direct link to a foreign terrorist organization was found, it was concerning enough that the Boston tragedy was carried out by men who were suspected to have shared the same radical ideology as those behind 9/11.

Islam condemns, in the strongest terms, the killing of innocent people when it states, “Whosoever killed a person … it shall be as if he killed all mankind” (5:33). Murder and mayhem are considered major sins in all religions. Prophet Muhammad is reported to have said, “A man will continue to be sound in faith so long as he does not shed blood unjustly.” Islam also lays great emphasis on loyalty to one’s homeland. Prophet Muhammad said, “Loyalty to one’s homeland is part of faith.”

Extremists have exploited religion as a political tool in all times. Terrorists working in the name of Islam are no different. They present a perverted interpretation of scripture to fulfill their own malicious agenda. Thankfully, Muslim groups have been ever more vocal in isolating and condemning such radical elements.

Mirza Masroor Ahmad, the Khalifa and spiritual head of the worldwide Ahmadiyya Muslim Community, for instance, unequivocally condemned the Boston attack and offered his condolences, saying:

My sympathies are with the victims of the Boston bombing. We condemn that attack in its entirety.

The Ahmadiyya Muslim Community is one of the most influential community of Muslims worldwide, represented by tens of millions of members in over 200 countries of the world.

On the first anniversary of the Boston tragedy, different communities are reaching out to provide much-needed support to affected families and remember this tragedy in their own distinct ways.

The Boston chapter of the Ahmadiyya Muslim Community USA for instance, remembered those affected through a blood drive at the Boston City Hall last Friday. The blood drive was organized in partnership with the city of Boston and the Boston Athletic Association, and will benefit patients at Boston Children’s Hospital, Dana-Farber Cancer Institute and Brigham and Women’s Hospital.

The Ahmadiyya Muslim Community USA has been hosting similar blood drives under the “Muslims For Life” initiative to honor 9/11 victims. This national campaign has collected over 33,000 blood bags in the last three years from hundreds of blood drives across the country, potentially saving around a 100,000 lives.

The local community also held prayers at the City Hall to remember those that were affected by the tragedy and to wish all spectators and participants a very safe Boston Marathon this year. What better way to honor our fallen than giving the gift of life to tens of thousands of others?

Boston bled a year ago. I — with hundreds of other Muslims and non-Muslims — bled for Boston this year, and shall continue to every anniversary of this great tragedy. Boston, we are strong together!