Originally published in The Daily Bulletin 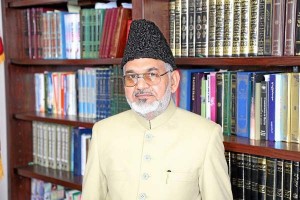 After the death and resurrection of Jesus (peace be upon him) as believed by Christians, nothing is closer to their heart or more central to their belief than his long-awaited second coming. Biblical prophecies about the second coming have been debated by Christian scholars for centuries. When Jesus failed to reappear at the dawn of the second millennium (AD 1000), a general consensus began to form that Jesus would return sometime in the mid-to-late 19th century. Numerous messianic and rapture movements started in fervent expectation of the return of Jesus in the 1800s. What if I were to tell you that those prophecies did indeed come true?

For all my devout, God-loving Christian friends who strive to be Christ-like and live their lives by his teachings and example and who await his second coming as he himself defined it — through someone else who would come, not physically, but in his power and spirit — the good news is, that Jesus Christ has already come.

He came as he said he would — “like a thief in the night” — born in India in 1835 and receiving his appointment by God as the promised messiah in the last quarter of the 19th century. His name was Mirza Ghulam Ahmad of Qadian (1835-1908).

Only Muslims say “Peace and blessings of God be upon him” whenever they hear or say the name of the holy prophet Muhammad. And it was Muhammad who received, memorized and recited for his followers the 114 chapters of the Holy Quran — all but one of which starts with the words: “In the name of God (the Lord), most gracious, ever merciful.”

All Muslims believe in Jesus as the true messiah for the Israelites. All Muslims also believe in the second coming of Jesus. The difference between Ahmadi Muslims and all other Muslims is that non-Ahmadi Muslims believe (as do most Christians) that Jesus was taken up bodily alive into heaven 2,000 years ago, and that he will bodily descend back down to Earth in the latter days. In both non-Ahmadi Muslim and Christian camps, mass slaughter is promised for those who do not submit to Jesus — see Luke 19:27 where Jesus says: “Bring all those who will not have me reign over them as their king and slay them at my feet.”

Only Ahmadi Muslims believe the second coming of Jesus will not be a blood-soaked killing spree, resulting in the deaths of billions of “disbelievers.” And only Ahmadi Muslims take Jesus at his word when he explained in Matt.17:12-13 that the prophet Elijah was not going to come again in his same physical body, but that Jesus’ cousin, John the Baptist, came “in the power and spirit of Elijah” to herald the arrival of the messiah.

Jesus clearly defines the real nature and form of second advents — including, by logical inference, his own. And yet, virtually all Christians and Muslims await the literal Second Coming of Christ from 2,000 years ago. True, the world needs the messiah now, but the messiah Jesus from the 1st century AD is not coming back himself.

Since the dawn of Islam, Christians have been accepting Islam. This will only continue as more and more Christians study the Bible and dare to question what they are taught in church. If, by seeking answers elsewhere, they investigate Ahmadiyya Islam (at Alislam.org), they will find the answers to their questions in the Quran and in the life of the Holy Prophet and in the advent of the promised messiah, Mirza Ghulam Ahmad.

Some Christians at the time of Muhammad, when they first heard the recitation of the Quran, recognized the truth of Islam and the fulfillment of the promised advent of a law-bearing prophet like Moses as mentioned in Deut.18:18-20 and Deut.33:2. Here are three verses from the Quran (ch.5, vv.83-85) specifically about Christians: … And thou shalt assuredly find those who say, “We are Christians,” to be the nearest of them in love to the believers [the Muslims]. That is because among them are savants [learned scholars] and monks and because they are humble. And when they hear what has been revealed [from the Quran] to this messenger [Prophet Muhammad], thou see their eyes overflow with tears because of the truth which they have recognized. They say, “Our Lord, we believe, so write us down among those who bear witness …” (ch.5, “Al-Maidah,” verses 83-85)