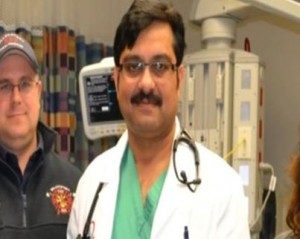 Persecution of Ahmadi Muslims in Pakistan is just as severe as it has always been. A sect of Islam that played an essential part in the founding of Pakistan is now being bitterly persecuted by extremists and the government is implicit in the persecution. In the last 4 years, 137 Ahmadis have been killed at the hands of persecutors who are backed by anti-blasphemy laws and a penal code that forbids Ahmadis from calling themselves Muslims.

Dr. Mehdi Ali, a cardiologist from Columbus, OH, went to Pakistan a few days ago to serve voluntarily at the Tahir Heart Institute. Shortly after paying his respects at an Ahmadi graveyard, he was gunned down in front of his wife and toddler by two unknown assailants for his faith. He leaves behind his 17, 5, and 2-year-old sons. Personally knowing him and his family, it pains me to say that he now joins this list of 137.

Awareness must be raised about the persecution and religious intolerance present in Pakistan and pressure must be put on the Pakistani government to repeal the blasphemy laws that open the door to such vigilante “justice.”

because Cardiologist Faith his killed of
FacebookTwitter

Originally published in The Trentonian As we celebrate Juneteenth amidst our current national crises, let’s revisit history. Despite slaves having been emancipated in 1865, many opposed their integration into society. Even in the North, African-Americans were systematically discriminated against through practices like redlining. On the other hand, we see a different historical example in how the...

Originally published in the Toledo Blade In Pakistan, my parents suffered the effects of legalized religious persecution. As Ahmadi Muslims, they were forbidden to preach, practice, or even profess their faith without potentially facing criminal charges by the state or vigilante punishment by extremists. My uncle was poisoned nearly to death and grandfather jailed several times simply because of...

Originally published in Financial Times Are we stuck in the civil war era of the 19th century? (“George Floyd and the story of the Two Americas”, FT View, June 3). The backlash of unrest on America’s city streets exposes two unresolved problems. The first is the immediate issue, which is an egregious absence, or at the very least, a massive delay of legal justice when it comes to felonies...

Originally published in The Minnesota Daily “Allah has made you brethren one to another, so be not divided. An Arab has no preference over a non-Arab, nor a non-Arab over an Arab; nor is a white one to be preferred to a dark one, nor a dark one to a white one.” These are some of the last words the Prophet Mohammed (peace and blessings be upon him) of Islam bestowed upon his followers during his...