Originally published in The Daily Caller 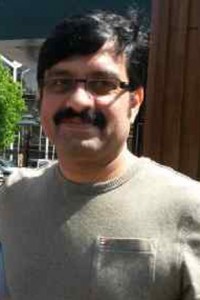 ​Some 50 years before terrorists brutally murdered him because they believed him an infidel, Mehdi Ali Qamar was born a Muslim. But by the age of 10 Pakistan’s government declared him an infidel, an apostate, and in the opinion of many extremist clerics — worthy of death. But that didn’t deter him. By the age of 20 Pakistan’s government declared Qamar a criminal, liable to fine and imprisonment — only because he yet insisted on calling himself a Muslim. But that didn’t deter him. And even when Pakistan’s government added a death for blasphemy provision to the law just a few years later — giving state sanction to the previous ‘worthy of death’ opinion — Mehdi Ali Qamar fearlessly marched forward, undeterred.

And despite that state sanctioned persecution only for his faith, by the age of 30 Mehdi Ali Qamar became Dr. Mehdi Ali Qamar at one of Pakistan’s top medical institutions.

He started a family and brought his expertise in cardiology to the United States by the age of 40 — where he and his wife began raising their three beautiful boys. He arrived to a new country with a new language, new culture, and new demographic. Once again it may have seemed that he was an outsider — but that didn’t deter him. Dr. Qamar embraced American culture and showed by example that he saw no conflict between his faith as a Muslim and identity as an American — ultimately attaining his U.S. citizenship.

Always the servant of humanity, Dr. Mehdi Ali Qamar participated in numerous humanitarian medical missions to provide free cardiac care to the poor and indigent. And though Pakistan treated him so horribly, he held a soft spot for all his fellow Pakistanis, and returned to provide them the healthcare their government couldn’t or wouldn’t. And on one such humanitarian mission on May 26, 2014, to the world leading Tahir Heart Institute in Rabwah, Pakistan, Dr. Mehdi Ali Qamar breathed his last.

At the age of 50, as Dr. Medhi Ali Qamar fearlessly marched forward, militant extremists shot him in the chest and stomach 11 times while his wife and two-year-old son watched in horror.

And now we have a choice before us — cower, or fearlessly march forward, undeterred.

The above scenario is not unlike that of millions of Ahmadi Muslims living in Pakistan. Ahmadi Muslims are Muslims who believe in the Messiah, Mirza Ghulam Ahmad of Qadian. For this belief in the Messiah Ahmad, Pakistan has criminalized the very existence of Ahmadi Muslims. Ahmadi Muslims have vehemently condemned religious violence for over 125 years and continue to serve humanity — as devout and loyal Muslims and citizens of our respective nations. Still, nations like Pakistan unearth every opportunity to kill, disenfranchise, and persecute us for our faith.

And worse yet, Pakistan’s apathy extends to its highest offices. Current Prime Minister Nawaz Sharif issued a public statement at an extremist conference in Chicago in 1989 — since banned — declaring it his mission to eliminate the Ahmadiyya Muslim Community. May 28 marks the 4-year anniversary that the Taliban murdered 86 Ahmadi Muslims in broad daylight. Four years later zero arrests have been made, despite one suicide bomber being captured alive. Four years later, the Pakistani government has acknowledged that they knew of the attack beforehand, allowed it to happen, and refuse to acknowledge any wrongdoing. Four years later, they have not condemned the attack.

Pakistan calls itself a democracy but is nothing more than a mullah-infested dictatorship with power in the hands of the elite extremist few. The nation has become a breeding ground for extremism and terrorism — an issue I delve into deeply in my book, The Wrong Kind of Muslim.

Last week an Ahmadi Muslim, Khalil Ahmad was murdered by extremists while in police custody for the alleged crime of blasphemy. This week Dr. Mehdi Ali Qamar was murdered  by extremists for the crime of serving humanity. And as we know with certainty that next week Pakistan will permit and silently endorse yet another brutal murder, we march forward undeterred.