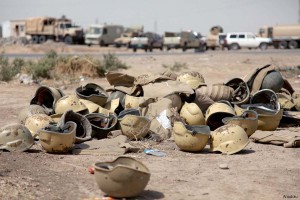 The ISIS menace, the atrocities of Syria, the chronic violence between Palestine and Israel, and the current siege on Gaza are a sign of spiritual entropy and political immorality. The political immorality is clear from ongoing civilian casualties. ISIS is killing innocent Christians, 700 Syrians have died in just the past few days, and some 75 percent of the near 1,100 Gazans killed are innocent civilians. The solution stems from reversing these destructive trends. We must garner a spiritual revival and a restoration of political morality.

What does that look like? To revive spirituality we need to focus on building better men and women, which in turn will build better institutions — not vice versa.

Who can argue that greed and deceit has polluted the religions of the world? Islam and the behavior of Muslims is no exception. Because of their fear of losing power and control, Muslim leaders and Muslim majority nations have shown shameful complacency and duplicity. They have not done an effective enough job to reign in the extremists and the miscreants amongst them. For example, ISIS has fused religious extremism with political power creating a juggernaut they foolishly call the caliphate. It has abandoned the Quranic principles of justice-based governance in favor of discriminate and grossly improper applications of Islamic law.

The Quran 5:64 refers to this corruption and reprimands the leaders ” Why do not the divines and those learned in the Law prohibit them from uttering falsehood (and doing evil deeds )… Evil indeed is that which they do.”

We humans have that unquenchable thirst for meaning and purpose. No other species seeks and needs transcendence as we do. But at this rate, peace on earth is simply not a realistic possibility. Humanity is an angry, passionate lot. And for all our genius and intellectualism, we’re also pretty stupid and selfish.

And maybe if we lived on islands this stupidity we’re prone to exhibit wouldn’t be as big a cancer. But in this global village a fire anywhere, if not put out, will eventually engulf us as well. So how should the United States, Western powers, and United Nations address this crisis? We can all say we do not want to get involved, invoke the Genovese syndrome, and be silent bystanders. It is such apathy that has contributed to the current dire state of affairs. Instead, we must act now to implore Muslim nations towards the right direction based on justice. The Qur’an 49:10 best defines this as follows:

After all, it was upon this premise that the United Nations was founded — to establish an international level of accountability for acts of injustice by individual nations.

This concept should not be alien to Muslims. The Quran 3:111 calls Muslims ” the best people raised for the good of mankind because they enjoin good and forbid evil and believe in Allah.” They are exalted because they are a “moderate people” (2:144) who guard against extremism and fanaticism. These verses beckon Muslims to tighten their belts and take their place in the fight against extremism with honor and dignity. The “bet of mankind” rank isn’t a default label, but a privilege for the select few who pursue it. Muslims must actively fight extremist ideology, which seeks to destroy humanity, or risk promoting iniquity and relegating themselves to what the Qur’an calls “the lowest of the low.” (95:6).

These are secular principles, not religious prescriptions. And perhaps not all of them will be palatable to all parties. As Henry Kissinger said “The test is not absolute satisfaction but balanced dissatisfaction.” One thing is for sure, however, that if some solution based on these principles is not achieved, the drift toward self-annihilation will accelerate.

The h​ead of the Worldwide Ahmadiyya Muslim Community, (the Khalifa of Islam), His Holiness, Mirza Masroor Ahmad used his first Friday Sermon of this year’s Ramadan, July 4th 2014 to appeal to the Muslim world to adopt righteousness, declaring:

The Muslim leaders and so-called clerics are not righteous or God fearing and as a result those under their influence are being entirely misguided. The clerics are pushing young people, who know no better, towards evil and cruelty by falsely claiming it will lead them to God… Could that God who sent the Holy Prophet Muhammad (peace be upon him) as a mercy for mankind let cruelty dwell on earth in the name of His blessed Prophet? Never!

If there is any hope for civilization, for an uplifting, ennobling and worthwhile human community to emerge from the current cacophony of strife, debasement, nihilism and fanaticism, Muslims must revert back to God for personal reformation and ensure universal justice for public peace. This starts with Muslim leadership taking personal ownership.

Otherwise, we risk ongoing catastrophe and violence from which no one will escape unscathed.