Anti-Sharia Rallies Are Dangerous for America

Just two weeks after a white supremacist went on an anti-Muslim tirade in Portland that ended with him stabbing three men in the neck, anti-Muslim hate rallies are being organized in over 25 cities across the country this Saturday, June 10th.  All are organized by ACT for America, an organization designated as both a hate group and an extremist group by the Southern Poverty Law Center. At a time when many ask why there is an alarming rise of hate crimes in the United States, such rallies continue to fan the flames of hatred and mistrust that give fertile soil to hate crimes and violence. 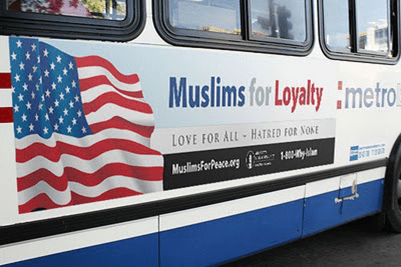 Dubbed as “Anti Sharia Rallies,” tomorrow’s events are very clearly anti-Islam and anti-Muslim – based on the words of the event organizers themselves.  Do not be mistaken into thinking this is about freedoms or human rights; rather, it is a calculated effort by ACT for America to manufacture division and hatred between Americans.  The Founder of this group, Brigitte Gabriel, has explicitly stated that any “practicing Muslim … who goes to mosque and prays every Friday, who prays five times a day — this practicing Muslim, who believes in the teachings of the Koran, cannot be a loyal citizen of the United States.”

This is not a fight against terrorism.  This is a coordinated effort to vilify and demonize Muslims and their faith to pit Americans against one another.  Gabriel has confirmed this time and again, stating that terrorists are simply “doing exactly what the Koran teaches,” alleging that Islam’s holy scripture mandates a “sacred obligation” to impose Islam on the entire world by force.  She has defined “authentic Islam” as an “ ideology of bigotry and intolerance” that preaches “violence and the slaughter of thousands.”  When explaining the roots of terrorism, she has concluded: “It’s not radical Islam. It’s what Islam is at its core.”

This group wants nothing more than for Americans to turn on each other – specifically against Muslim Americans.  Although only 38% of Americans know a Muslim themselves, this organization wants to destroy any trust Americans have in Muslim Americans.  It is for this reason that Gabriel said: “Our enemies are the neighbors next door, the doctors practicing in our hospitals, and the workers who share our lunch break.”  That’s right – she alleges that every Muslim American living in your midst is your enemy.

This is reminiscent of the hateful rhetoric of Nazi Germany.  This is not what America stands for.  This is not the America I was born and raised in and love with all my heart.  As Americans, we need to resist and push back against such hate-filled rhetoric that aims to strip people of their humanity.  Do not get sucked into this group’s crusade against tolerance, cooperation and peace.

If you are truly concerned about the systems of government in countries like Saudi Arabia, Sudan or Afghanistan, know that so am I and countless other Muslims.  But going to an anti-Sharia rally and listening to those who don’t even know what the Arabic word Sharia means will not fix the problem.  You have in me and millions of other Muslims willing partners to call-out the barbaric policies and practices of various countries and to protect our homelands from such depravity. The solution is to work together, not against one another.  Far from finding any solution, tomorrow’s rallies perpetuate the problem.

Instead, why not go to one of the 100 meet-ups across the country this Saturday where you can have an opportunity to meet a Muslim and find real answers to real questions? As an American Muslim, I too want to save our country and the world from the scourge of radicalism, and we can only do so when we come together.

Brigitte Gabriel is not entirely wrong though.  I agree with her when she says “America has been infiltrated on all levels by radicals who wish to harm America.” She is absolutely right.  And on Saturday, you will find these radicals at rallies organized by ACT for America all around the country.

Letter to the editor | Homegrown terrorism a threat to our nation

Dear Muslims: HOW MUCH HARM IS AHMADIYYAT REALLY DOING TO THE WORLD?

My View: Portland stood up to hatred then and now

A Muslim’s Outcry in the Wake of Terror Attacks

Anti-Sharia Rallies Are Dangerous for America