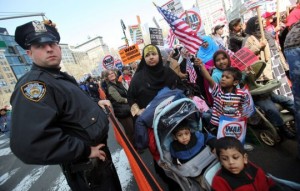 I am a Muslim-American, and the Chardon High School shooting spree last week makes me wonder whether law-enforcement agencies are focusing on the right problem.

Authorities such as the New York Police Department have spent millions of dollars on controversial security surveillance programs focused on Muslims, when the underpinnings of youth violence largely have been ignored.

In the past 15 years, about 120 students have perished in more than 70 school shootings. And that doesn’t include the 13 killed in the Columbine massacre from 1999.

No one will argue that we need to keep our shores safe from extremists. But rather than targeting a religious minority, our government needs to focus more attention on probing the roots of the violence that our teens witness in their classroom.

Let’s not wait until the next school incident.

Tariq Malik spent five years studying Theology in a private Canadian university. After returning from Canada, Tariq enrolled in the Islamic Studies program at the Ohio State University and graduated in 2012. He is an active member of the Columbus Chapter of the Ahmadiyya Muslim Youth Association. Tariq currently works for The Review of Religions, one of the longest running comparative religions magazines, as an Associate Editor.