All faiths must unite against terrorism

Originally Published in The Daily Herald 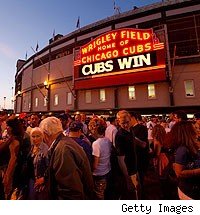 Sami Hassoun’s anger at the world, perhaps even at the Cubs, could have been overturned had he only followed his daily prescription — face east and prostrate into prayer. This is how Muslims should reconcile their anger, by praying for the salvation of their nation — not by setting plots to destroy the very cities in which we live. This is the oath I have taken as a Muslim and as a citizen of this country, “ … to sacrifice my life for the sake of my faith, country and nation.” Sami, who was accused of placing a backpack he thought held a bomb near Wrigley Field, only fuels the misconceptions about Muslims, and his violent act is not our true practice.

As Americans of all faiths, we need to continue to join together and build a greater shield against those who target our safety in this country. While this doesn’t guarantee a World Series, it is a leap toward a great victory for America. Now that’s a home run!

For the love of my Country, I disagree with Obama

For Ahmadi Muslims, another memorial day

All faiths must unite against terrorism

Consider those in need this Black Friday