Originally Published in The Oshkosh Northwestern 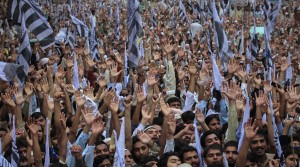 Movie itself is a disgrace to the idea of free speech – but the response by these thousands of protesters is a disgrace to the human race. Even an elementary study of Islam shows clearly that it does not prescribe any punishment for blasphemy and that Prophet Muhammad (peace be on him) faced such ridicule in his own life but never avenged it. Regardless of how bad the movie was, all Muslims must focus their energies on the inhumane response. It is sad that most official condemnations of these protests somehow indicate that real reason was the movie. This is the general apologetic attitude of the Muslims that is at the core of this mess.

Whereas Islam does not prescribe any punishment for such speech, many Muslims wrongly consider it their duty to avenge it. In recent years it has reached new lows where Pakistan’s penal code prescribes death penalty for blasphemy. Several other Muslim countries are moving in this direction as well and unless the civilized world checks this trend we would see more of this – not less. An eleven year old mentally disabled Christian girl in Pakistan was recently put in Jail simply because she was accused of blasphemy. Another Christian woman Asia Bibi is also languishing in a Pakistani jail for this accusation.

If Muslim countries create such laws then why is the world surprised at the reaction of these mobs? Such laws, approved by democratic parliaments, represent the deeply held principles of the people. If their core principle is that a blasphemer deserves to die then shouldn’t we expect that if a blasphemer is not killed that mobs would demand it? If a serial killer is set free, wouldn’t there be outrage anywhere in the world?

Unless we see the issue in its proper context that the core values held by many Muslims with regards to blasphemy is contradictory to Islam and civilized people everywhere – we will not be able to understand it. In a situation like this, Muslims – especially those enjoying the freedoms of the western world, must step forward and not only condemn the symptoms but also the disease. They must call for moderation in the attitudes of the Muslim countries and demand that such arcane laws be removed from their books and they must strive to create open and inclusive societies.

Saad Ahmad is an Oshkosh resident and former community member of the Northwestern editorial board, e-mail[email protected]

Saad Ahmad received his Bachelors degree from University of Wisconsin, Oshkosh. He has published in various newspapers and has served as a community member on the Oshkosh Northwestern newspaper editorial board. He maintains his own blog at http://saadahmad.blogspot.com