To whom it may concern,

In the Quran, Allah the Most Gracious and Merciful says:

These verses and the above quote may not appear to be related at first, but after further review, their relationship will be made clear. One may be indifferent to the opinion in this letter, but as a moral and conscientious person, I will at least clear myself as one who was not silent and made concerted efforts to condemn violent and brutal acts against innocents.

On December 12, 2016, a mob of 1000 men, armed with sticks and other weapons, besieged an Ahmadiyya Muslim mosque in the small town of Dhulmiyal, Pakistan. They set the property on fire and desecrated the place of worship. Two Ahmadis lost their lives. The worst part is the mob was led by an extremist cleric who traveled from Canada to incite the violence. All of this transpired on the birthday of a man sent to be a mercy for all mankind. These Muslims believed themselves to be celebrating the birthday of the Holy Prophet of Islam, Hazrat Muhammad (peace be upon him). Holy Prophet SAW did not only champion peace but if he were to be alive today,he would surely not recognize such people who commit violence in his name.  In fact, he would disown them. Prophet Muhammad SAW said, “to take any man’s life or his property, or attack his honor, is as unjust and wrong as to violate the sacredness of this day, this month and this territory.” The Prophet also is reported to have ordered his followers and companions not to cut down trees, burn agricultural fields, or to destroy the worshipping place of any religion even though they may be in the middle of battle.  The Prophet also executed the command of Allah requiring the Muslims to provide protection to people who occupy any place of worship. 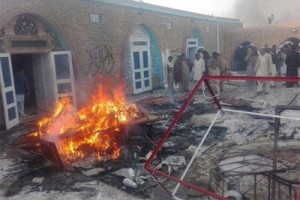 According to the second amendment passed under the 1973 constitution of the “Islamic Republic of Pakistan,” Ahmadis are declared as Non-Muslim. Since this fateful amendment was passed, Ahmadis have been a target in every society and in every culture in Pakistan. Incidents such as the recent attack on an Ahmadi Mosque is not isolated and has been a growing problem since the passing of this amendment. Perhaps the worst attack was on May 28, 2010, when Muslim terrorists attacked 2 Ahmadiyya Muslim mosques in Lahore, Pakistan and killed more than 100 Ahmadis who were gathered for Friday prayers. Instead of preventing other factions from committing violence against peaceful Ahmadis, the law supports this discrimination. According to the law, Ahmadis are not allowed to declare or identify themselves as Muslims.  Even if an Ahmadi Muslim “poses” as a Muslim or if they use Islamic terminology, they are either sentenced to prison or charged with heavy fines. Ahmadis are also not allowed to print or distribute their peaceful literature. Under NAP (National Action plan) against terrorism, the central HQ of Ahmadiyya Muslim community was raided not more than a week before the above mentioned incident.  Four Ahmadis were arrested and charged with distributing literature and the office staff was tortured with the sticks. One Ahmadi was hospitalized because of the torture.

Such incidents are only a manifestation of the government’s inability to protect minorities.  On the same day as the events in Dhulmiyal were unfolding, the Prime Minister of Pakistan was self congratulating in a convention saying that in the past 3 years of his government, and the with great hard work, the door of violence has nearly been closed. I would like to remind the prime minister that this is the 3rd time he is in office and minorities are still being persecuted. Amongst all minorities, the Ahmadis are treated worst. They are the only ones stripped of civil liberties. Ahmadi Muslims do not have the right to vote, their literature is seized under false charges of terrorism, and their places of worship are threatened. No protection is offered from the government, and yet the young members of their community volunteer to provide security at the places of worship.

I would also like to remind the Prime Minister that some of the events of the second successor of Holy Prophet SAW, Umar (may God be pleased with him). One night, he woke up crying and in response to his wife’s inquiry, he said,” Even if a dog dies of thirst on the banks of Euphrates, I will be questioned about it on the day of Judgement.” On another occasion, a christian woman went to him and asked for some money. Umar asked her why she did not convert to Islam, but he immediately repented saying he has no business in other people’s religion and should not have asked or compelled her. On another occasion, Umar said, “Since when have you taken people for slaves and they were born free??” The meaning of these quotes and incidents is that a person in authority is responsible for the well-being of everyone under him/her. Religion is for each and everyone to follow and practice without any compulsion.  Surely, Pakistan is an Islamic republic, but the references given here about Islam are the true principles whereas the events  unfolding in the country are unIslamic and far from the practices of the Holy Prophet who was sent as a mercy of mankind.

I strongly condemn and my heart is sad on the events that are happening in Pakistan. In addition to offering this letter, I would also offer my prayers that Pakistan finds peace and prosperity. Surely, not everyone is silent and there are good samaritans who condemn these acts happening across Pakistan and offering help however they can. To them, I say, Thank you for the being the voice of reason and peace. May God bless us all and the whole of humanity finds peace.

Originally Published in The New Jersey Record. Regarding “Ads criticizing Muslim radicals go up in N.Y.C. subways” (Page A-7, Sept. 25): Anti-jihad ads that imply Muslims are “savage” have recently gone up on New York City subways. “Defeat Jihad” and “support the civilized man,” parts of the ad read. The advertisement is the brainchild of Pamela...

Originally Published in The Pittsburgh Post-Gazette. This 12 year old Muslim-American wants to know why an offensive movie was made against his holy founder the Prophet Muhammad. The film portrayed him as a warmonger, whereas he lived and taught peace and harmony. I belong to the Ahmadiyya Muslim Community USA, and we were very hurt by the news of the film. Instead of violent protest, however, we...